Thanks to Linux, we have access to many tools that facilitate networking administration & diagnostics. In this sense, the Linux ping command is one of the most useful tools for sysadmins and network administrators.

Its basic function is to determine if one host of the network is reachable or not. However, in this post, we will address other more advanced capabilities of the Linux Ping command.

What is the use of the ping command?

The ping command is one of the most basic tools for working with networks. Its purpose is to diagnose network connection errors.

In this way, it is possible to know if a network node has lost connectivity. On the other hand, it is also useful to perform other diagnostic tasks such as the following:

As you can see, it is a necessary command for the administration of networks and servers.

How does ping command work?

In Linux, the functioning of the ping command is quite simple to explain. The command sends a series of small packets to a specific node.

You can test this node using either the IP address or the hostname. Then, after you send the packet, the command verifies and measures the time it takes to receive a response from the destination node.

As you may expect, the response time may be affected due to conditions such as the geographical location between the connection points or any piece of the hardware used between the two nodes.

For example, in wired private networks, the command will get better times than with a network with multiple routers or bridges.

However, the information that the command will generate will judge whether the network is in good or bad condition.

The syntax of the command is as follows:

Some of the most useful and used options of the ping command are the following:

The destination node can be specified by an IP address or a hostname.

Can I ping with a proxy?

A proxy is a server or application that acts as an intermediary for the connection between two points on a network. It is the man in the middle who makes the request directly to another node.

The problem is that the Ping command requires a direct network connection between the nodes.

Therefore, the Ping command generally cannot function properly if there is a proxy behind it.

A possible solution is that many websites offer the Ping command service. On the other hand, for some tasks of the ping command, it is possible to use the curl command. Also, you can use a VPN so that it will hide your IP.

Normally, when using the Ping command, we use IP addresses with the IPv4 protocol. However, with the advent of the IPv6 protocol, it is increasingly common to notice addresses in this format.

The Linux kernel supports the IPv6 protocol since version 2.2, so all Linux distributions currently support it.

The basic syntax is as follows:

On old versions, there was ping6 command. On recent versions of Linux, ping6 doesn’t exist anymore, and its functionality has been merged into ping, and it works the same way as you saw.

The basic syntax is as follows:

With the option -c, we can specify the number of packets to send and with -i for the network interface you will use. For example:

Sometimes we want to know if a specific port on a node is active. However, the ping command does not provide this functionality, but it is possible to do it with the telnet command that is installed by default on Linux.

To do this, just use the following syntax:

In this way, it is possible to ping a specific port of a network node in a primitive way.

Although the ping command displays useful information, it may be a little simple. However, it is possible to modify the operation of the command a little, to make it show the date the packet is sent.

This can make the information pleasing to the eye and might be useful for scripts and logs.

This syntax is sufficient to do it. However, you need to install the ccze package.

As you can see, it shows the time for every packet sent.

Ping all the hosts on a given subnet

You can send a ping signal to all hosts on a network or subnet. For this, it is enough to add the option -b and ping the broadcast IP address of any network which ends with 255.

So if the destination is unreachable, maybe they block ICMP packets sent by the ping command, or maybe there is a network problem or a problem on the routing table.

How to end a ping?

By default, the ping command on Linux continuously sends test packets to hosts. However, once the information is available, it becomes necessary to terminate the execution of the ping command.

To do so, simply press the following keys: 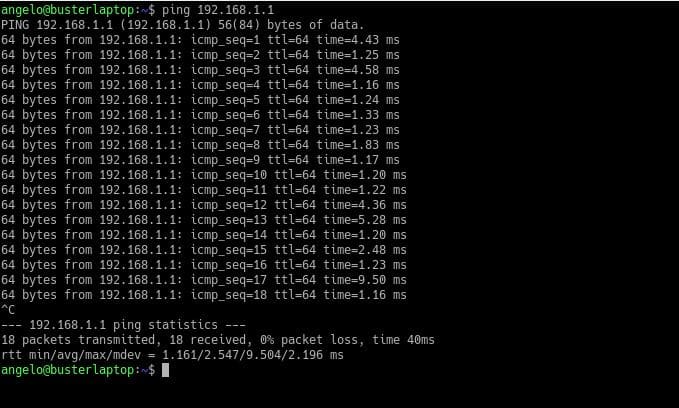 This way, the command will immediately stop working.

End after a specific count

You can limit the count of packets to 10 or whatever. When it finishes sending the ten packets, it will stop. 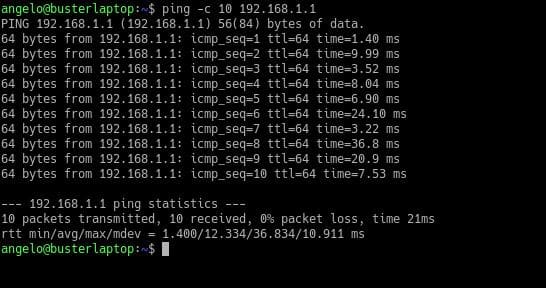 Where does ping command located on Linux?

In a Unix-derived system like Linux, binaries are commonly found in the path:

In this directory, you will find many binaries that we use as commands on the terminal. In other operating systems of the Linux family, it is also possible to place it in the

So, we can check it by using the ls command:

In this image, you can see that the ping commands are located in

Another way, you can use the which command to locate any command on Linux:

It will show the following:

One of the possibilities offered by the ping command is that you can measure the connection response time. That is the latency.

To measure the latency using the ping command, just use it and pay attention to the screen output:

As you can see, four packets have been sent to the destination with a certain response time.

At the bottom, there is a line that starts as follows:

The second value after the equal sign is the latency value. In this case, the value is 6.798.

With the latency, it is possible to determine the hosts that have connectivity inferior to the rest. This way, we will be able to take the pertinent measures.

The MTU (Maximum transmission unit) is a value that statically expresses the size in bytes of the largest data unit that can be sent over a network.

Currently, due to security measures, more and more networks are preventing MTU from working. However, most Ethernet local area networks use a 1500 byte MTU.

If you want to find the ideal MTU value using the ping command, set the initial values, and decrease until there is no error. If the value is too high, we will get the next error:

To do this, use the following syntax:

If you get another message, the initial value must be decreased one by one until you get the desired result.

If the MTU value is known, it can be used to improve network behavior, especially if this is a large or even metropolitan network.

With the ping command, we will be able to perform tests knowing the IP address of a specific node within the network. This is because the ping command works on layer 3 of the OSI model (network).

On the other hand, it is possible to use another command that is built into Linux as arping. This command works very similar to ping but works on layer 2 of the OSI model.

The syntax of the command is as follows:

The screen output of the command shows first the size of the sent packet and then the MAC address of the node and the response time.

Note that this command is not installed by default on Debian Linux and derivatives. So you have to install it, then you can run it as root.

By default, the ping command sends test packets to the destination using the IP address or the hostname of the destination. It should also be noted that most ping implementations on Linux do not resolve DNS in reverse.

For example, if you use the Ping command by adding an IP address, it will only return the IP address of the host at the output. Conversely, if we have specified a hostname, it will resolve it and show the IP at the output.

Check the output of the following command:

The ping command doesn’t show the route from the source to reach the destination.

The tracert or traceroute command works in a very similar way to the ping command. The advantage of this is that it shows the path that the packet takes, thus showing its route.

Like the ping command comes installed in most Linux distributions. The basic syntax is as follows:

That way, we can see the route the packets are taking.

For example, this shell script allows you to check if the ping command fails:

The default size of packets sent by the ping command to hosts is 56 bytes. It’s a low enough value not to affect the operation of the network.

However, it is possible to change it to another value. To do this, simply add the -s option with the desired packet size.

If you want the packet size to be 100 bytes, just use the following command:

Remember that it may vary slightly by the MTU.

If we are responsible for maintaining a network, we may want to disable ping responses at any time. We can do it temporarily or permanently, according to our needs.

If we want to deactivate it temporarily, it is enough to use this command as the root user:

This will disable the ping command response, but only until you reboot the system.

If you want to do it permanently, you have to edit the following file

and add the next line:

Then save the file and exit. To apply the changes, use this command:

This will disable the ping command or ICMP packets’ response.

In this post, we have explained in detail how the ping command works on Linux. From its utility till disabling it. Ping is one of the easiest commands to use.

This makes the person responsible for the operation of the network know where the problem is so he can take action.

I hope you find the post useful. Keep coming back.