If you have ever worked processing a large amount of textual data, you would know the pain of finding and removing irrelevant words or characters from the text.
Doing this job manually, even with the help of modern word processors, can be time-consuming and frustrating.
Fortunately, programming languages such as Python support powerful text processing libraries that help us do such clean-up jobs efficiently.
In this tutorial, we will look at various ways of removing punctuation from a text in Python.

Removing punctuation is a common preprocessing step in many data analysis and machine learning tasks.
For example, if you’re building a text classification model, or constructing a word cloud from a given text corpus, punctuation are of no use in such tasks and so we remove them at the pre-processing step.
If you’re working on user-generated text data such as social media posts, you’d encounter too much punctuation in the sentences, which may not be useful for the task at hand, and so removing all of them becomes an essential pre-processing task.

This method, by default, removes all occurrences of a given character or substring from the given string.
We can limit the number of occurrences to replace by passing a ‘count’ value as the 3rd parameter to the replace method.

Here’s an example where we first use the default value of count(-1) and then pass a custom value for it.

It is important to note that in all our usages of the replace method, we’ve stored the result string in a new variable.
This is because strings are immutable. Unlike lists, we cannot modify them in place.
Hence, all string modification methods return a new, modified string that we store in a new variable.

Now let’s figure out how we should use this method to replace all occurrences of punctuation in a string.

We must first define a list of all punctuation that we are not interested in and want to get rid of.
We then iterate over each of these punctuations and pass it to the replace method called on the input string.
Also, since we want to remove the punctuation, we pass an empty string as the 2nd parameter to replace it.

Since it was a short text, we could anticipate what kind of punctuation we would encounter.
But real-world inputs could span thousands of lines of texts, and it would be difficult to figure out which punctuation is present and need to be eliminated.
However, if we are aware of all the punctuation we may encounter in an English text, our task would become easy.
Python’s string class does provide all punctuation in the attribute string.punctuation. It’s a string of punctuation.

Once we have all the punctuation as a sequence of characters, we can run the previous for loop on any text input, however large, and the output will be free of punctuation.

There is another way in Python using which we can replace all occurrences of a bunch of characters in a string by their corresponding equivalents as desired.
In this method, we first create a ‘translation table’ using str.translate. This table specifies a one-to-one mapping between characters.
We then pass this translation table to the translate method called on the input string.
This method returns a modified string where original characters are replaced by their replacements as defined in the translation table.

In the maketrans method, the first two strings need to be of equal length, as each character in the 1st string corresponds to its replacement/translation in the 2nd string.
The method accepts an optional 3rd string parameter specifying characters that need to be mapped to None, meaning they don’t have replacements and hence will be removed (this is the functionality we need to remove punctuation).

We can also create the translation table using a dictionary of mappings instead of the two string parameters.

This additionally allows us to create character-to-strings mappings, which help us replace a single character with strings (which is impossible with string parameters).
The dictionary approach also helps us explicitly map any character(s) to None, indicating those characters need to be removed.

Let us use the previous example and create the mapping using a dictionary.
Now, we will also map ‘!’ to None, which will result in the removal of the punctuation from the input string.

Note that when we print the translation table, the keys are integers instead of characters. These are the Unicode values of the characters we had defined when creating the table.

Finally, let’s use this approach to remove all punctuation occurrences from a given input text. 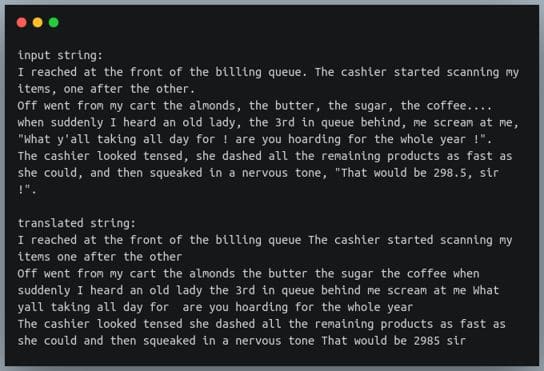 RegEx, or Regular Expression, is a sequence of characters representing a string pattern.
In text-processing, it is used to find, replace, or delete all such substrings that match the pattern defined by the regular expression.
For eg. the regex “\d{10}” is used to represent 10-digit numbers, or the regex “[A-Z]{3}” is used to represent any 3-letter(uppercase) code. Let us use this to find country codes from a sentence.

All occurrences of 3-lettered uppercase codes have been identified with the help of the regex we defined.

If we want to replace all the matching patterns in the string with something, we can do so using the re.sub method.
Let us try replacing all occurrences of the country codes with a default code “DEF” in the earlier example.

For example, if we know that we can expect only the English alphabet, digits, and whitespace, then we can exclude them all in our regex using the caret symbol ^.
Everything else by default will be matched and replaced.

Let’s define it both ways.

Now let us use both of them to replace all the punctuation from a sentence. We’ll use an earlier sentence that contains various punctuation. 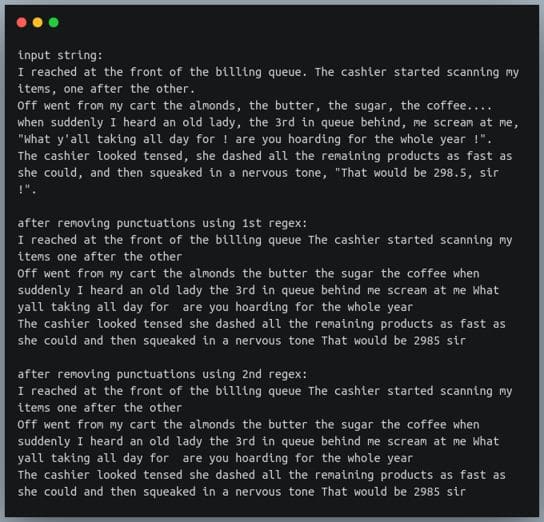 Both of them produced results identical to each other and to the maketrans method we used earlier.

Python’s nltk is a popular, open-source NLP library. It offers a large range of language datasets, text-processing modules, and a host of other features required in NLP.
nltk has a method called word_tokenize, which is used to break the input sentence into a list of words. This is one of the first steps in any NLP pipeline.
Let’s look at an example.

The default tokenizer being used by nltk retains punctuation and splits the tokens based on whitespace and punctuation.

We can use nltk’s RegexpTokenizer to specify token patterns using regex.

Remove punctuation from start and end only

If we want to remove the punctuation only from the start and end of the sentence, and not those between, we can define a regex representing such a pattern and use it to remove the leading and the trailing punctuation.

Let’s first use one such regular expression in an example, and then we will dive deeper into that regex.

The output shows the quotes (“) at the beginning and end, as well as the exclamation mark (!) at the second-to-last position, have been removed.
The punctuation occurring between the words, on the other hand, is retained.

There are two, different patterns in this regex, each enclosed in parentheses and separated by an OR sign (|). That means, if either of the two patterns exists in the string, it will be identified by the given regex.
The first part of the regex is “^[^\w\s]+”. There are two caret signs (^) here, one inside the square brackets, and the other, outside.
The first caret i.e the one preceding the opening square bracket, tells the regex compiler to “match any substring that occurs at the BEGINNING of the sentence and matches the following pattern”.
The square brackets define a set of characters to match.
The caret inside the square bracket tells the compiler to “match everything EXCEPT \w and \s”. \w represents alphanumeric characters, and \s, whitespace.
Thus, everything at the beginning, other than alphanumeric characters and whitespace (which would essentially be the punctuation) will be represented by the first part of the regex.

The second component is almost similar to the first one, except that it matches the specified set of characters occurring AT THE END of the string. This is denoted by the trailing character $.

The strip method removes white spaces only at the beginning and end of the string.
We would also like to remove the extra spaces between the words.
Both of these can be achieved by splitting the string with the split method, and then joining them using a single space ” “.

Let us combine the removal of punctuation and extra spaces in an example.

Remove punctuation from a text file

So far, we have been working on short strings that were stored in variables of type str and were no longer than 2-3 sentences.
But in the real world, the actual data may be stored in large files on the disk.
In this section, we will look at how to remove punctuation from a text file.

First, let’s read the whole content of the file in a string variable and use one of our earlier methods to remove the punctuation from this content string before writing it into a new file. 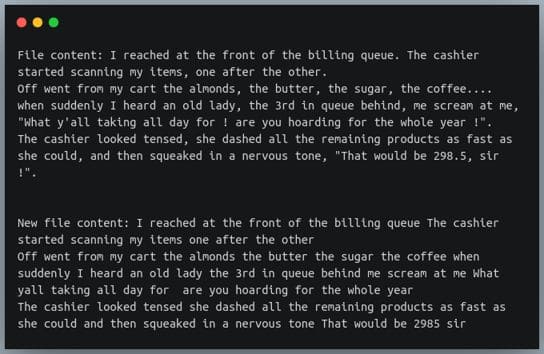 So, we will read the text file one line at a time, process it, and write it to the new file.
Doing this iteratively will not cause memory overload, however, it may add some overhead because repetitive input/output operations are costlier.

In the following example, we will remove punctuation from a text file(found here), which is a story about ‘The Devil With Three Golden Hairs’! 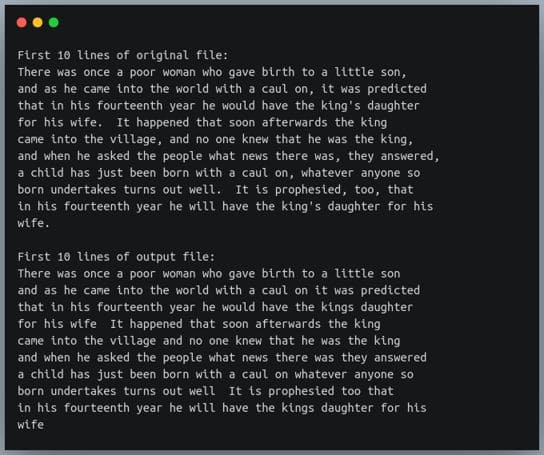 As seen from the first 10 lines, the punctuation has been removed from the input file, and the result is stored in the output file.

Remove all punctuation except apostrophe

Apostrophes, in the English language, carry semantic meanings. They are used to show possessive nouns, to shorten words by the omission of letters (eg. cannot=can’t, will not=won’t), etc.

So it becomes important to retain the apostrophe characters while processing texts to avoid losing these semantic meanings.

Let us remove all the punctuation but the apostrophes from a text. 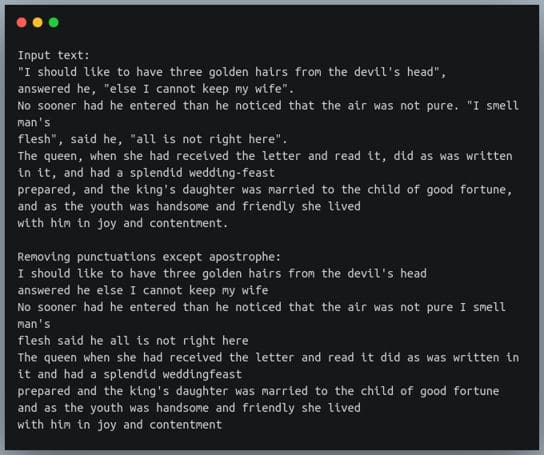 Now that we have seen so many different ways for removing punctuation in Python, let us compare them in terms of their time consumption.

We will compare the performances of replace, maketrans, regex, and nltk.

We will use tqdm module to measure the performance of each method.
We will run each method 100000 times.
Each time, we generate a random string of 1000 characters(a-z, A-Z,0-9, and punctuation) and use our methods to remove punctuation from them. 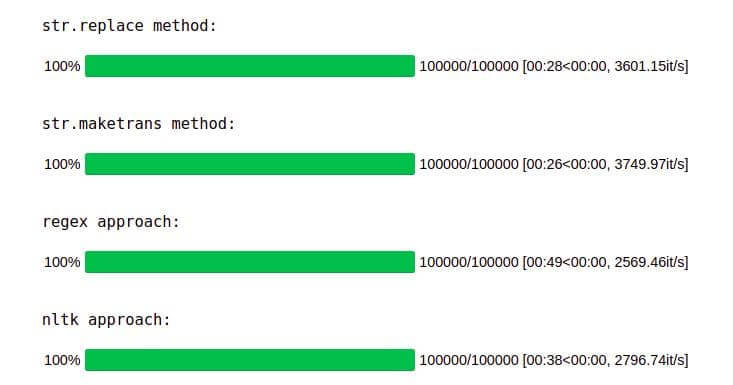 The str.maketrans method, in combination with str.translate is the fastest method of all, it took 26 seconds to finish 100000 iterations.
The str.replace came a close second taking 28 seconds to finish the task.
The slowest approach is the use of nltk’s tokenizers.

In this tutorial, we looked at and analyzed various methods of removing punctuation from text data.

We began by looking at the str.replace method. Then, we saw the use of translation tables to replace certain characters with other characters or None.

We then used the powerful regex expressions to match all punctuation in the string and remove them.
Next, we looked at a popular NLP library called nltk and used one of its text preprocessing methods called word_tokenize with the default tokenizer to fetch tokens from an input string. We also used the RegexpTokenizer for our specific use case.

We saw how we can remove punctuation from any length of text stored in an external text file, and write the processed text in another text file.

Finally, we compared the performances of the 4 prominent methods we saw for removing punctuation from a string.