There are two standard deviation notions in statistics.

One is the population standard deviation. It computes the spread directly from all values in a population. You use it when the values you have at hand represent the entire population.

Another one is the sample standard deviation. It tries to estimate the population spread by using only a sample subset of values. You use it when the values you have at hand represent just a subset of the entire population.

The sample standard deviation is an approximate measure. It’s useful because frequently, the data population is too big, and all we can only directly measure a randomized sample of it.

Population and sample standard deviations are calculated using slightly different algorithms. Hence, when programming, you should always keep in mind which one you want to compute and call the appropriate APIs.

Since version 3.x Python includes a light-weight statistics module in a default distribution, this module provides a lot of useful functions for statistical computations.

There is also a full-featured statistics package NumPy, which is especially popular among data scientists.

The latter has more features but also represents a more massive dependency in your code.

Computing sample standard deviation on a list of values in Python can be accomplished with the statistics.stdev() function. 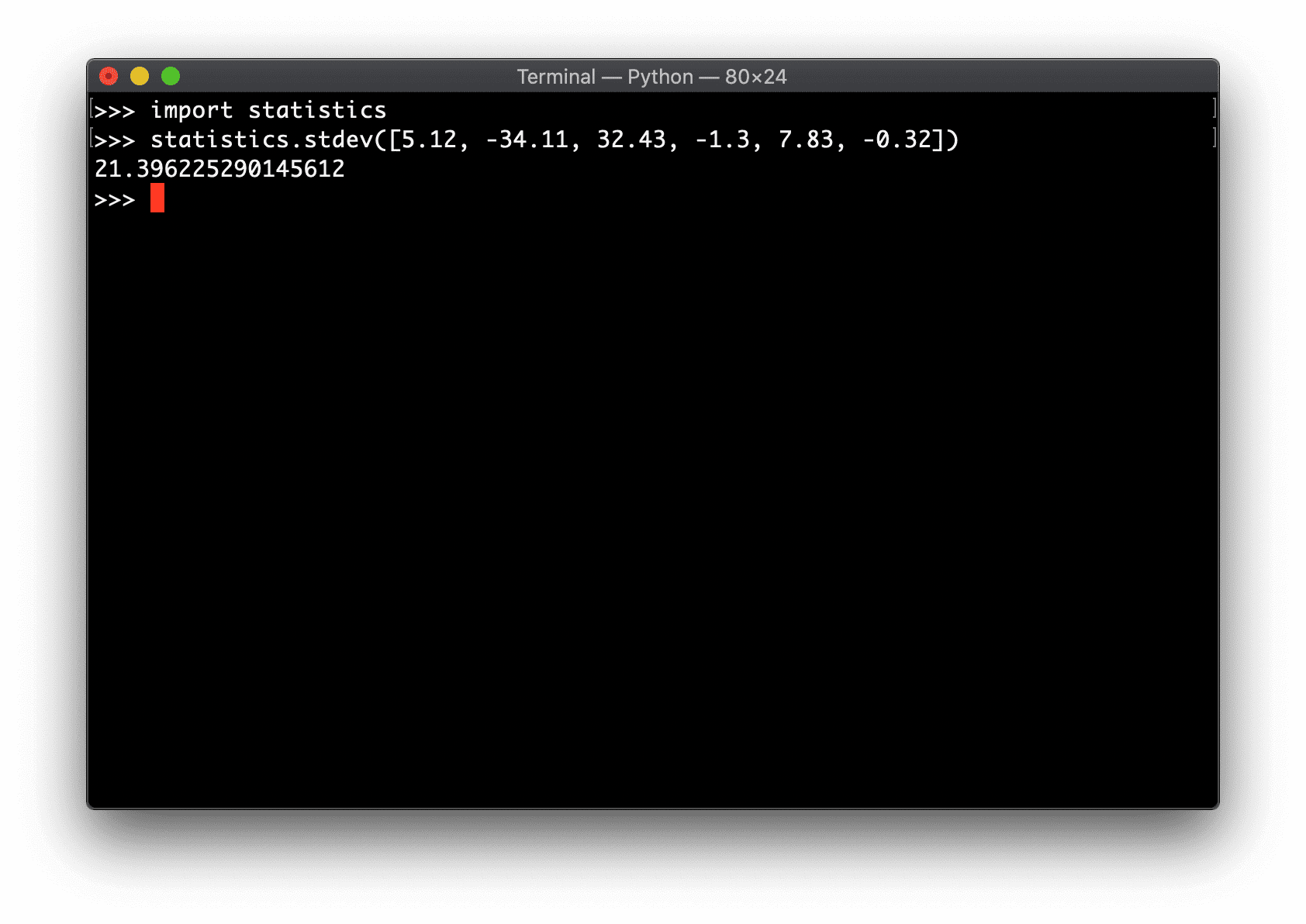 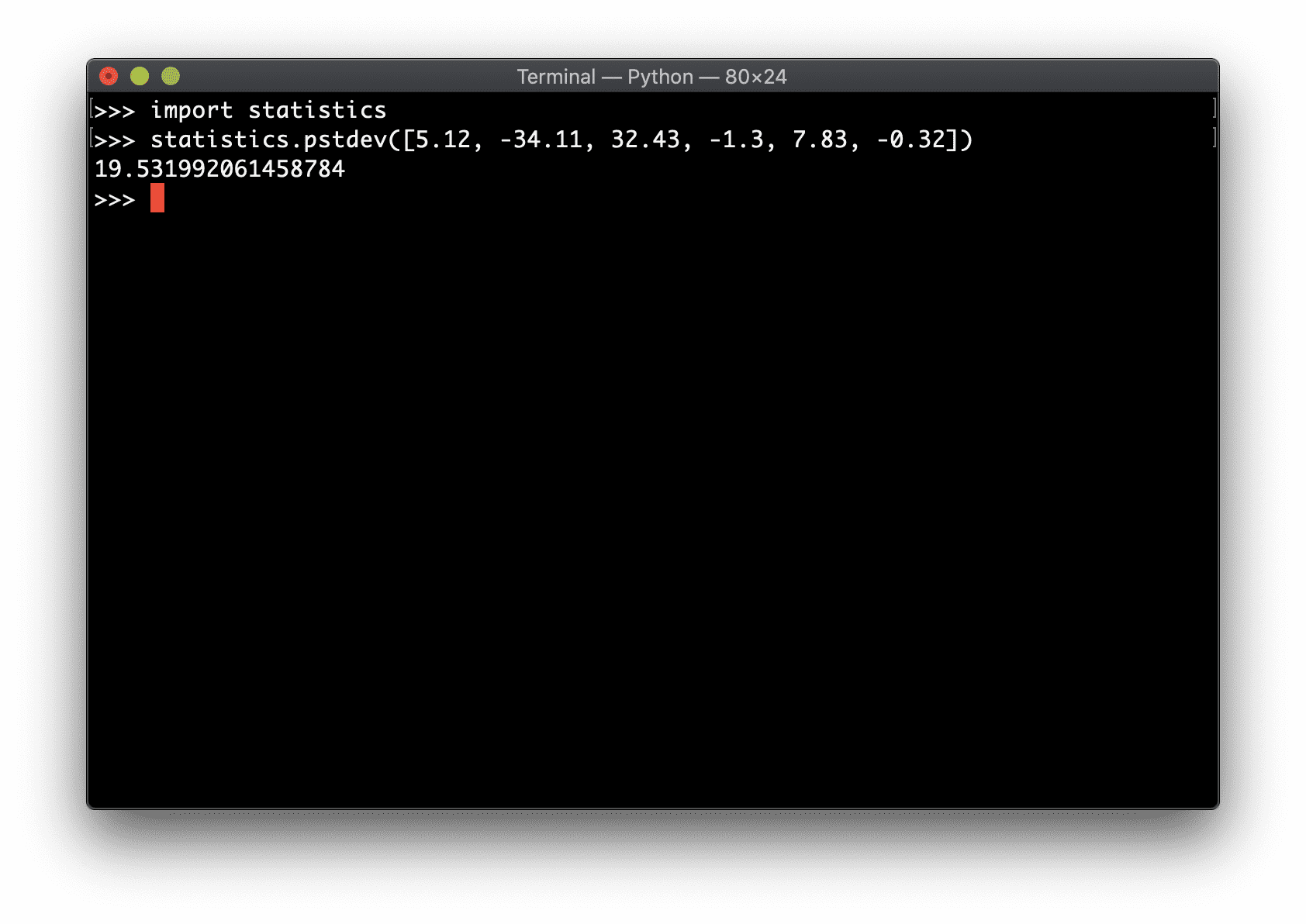 In the examples which follow, we’ll be showing how to apply statistics.stdev() function to different Python data types. If you need to calculate the population standard deviation, use statistics.pstdev() function instead. The rest of the code must be identical.

Another option to compute a standard deviation for a list of values in Python is to use a NumPy scientific package.

It doesn’t come with Python by default, and you need to install it separately. The usual way of installing third-party packages in Python is to use a Python package installer pip. 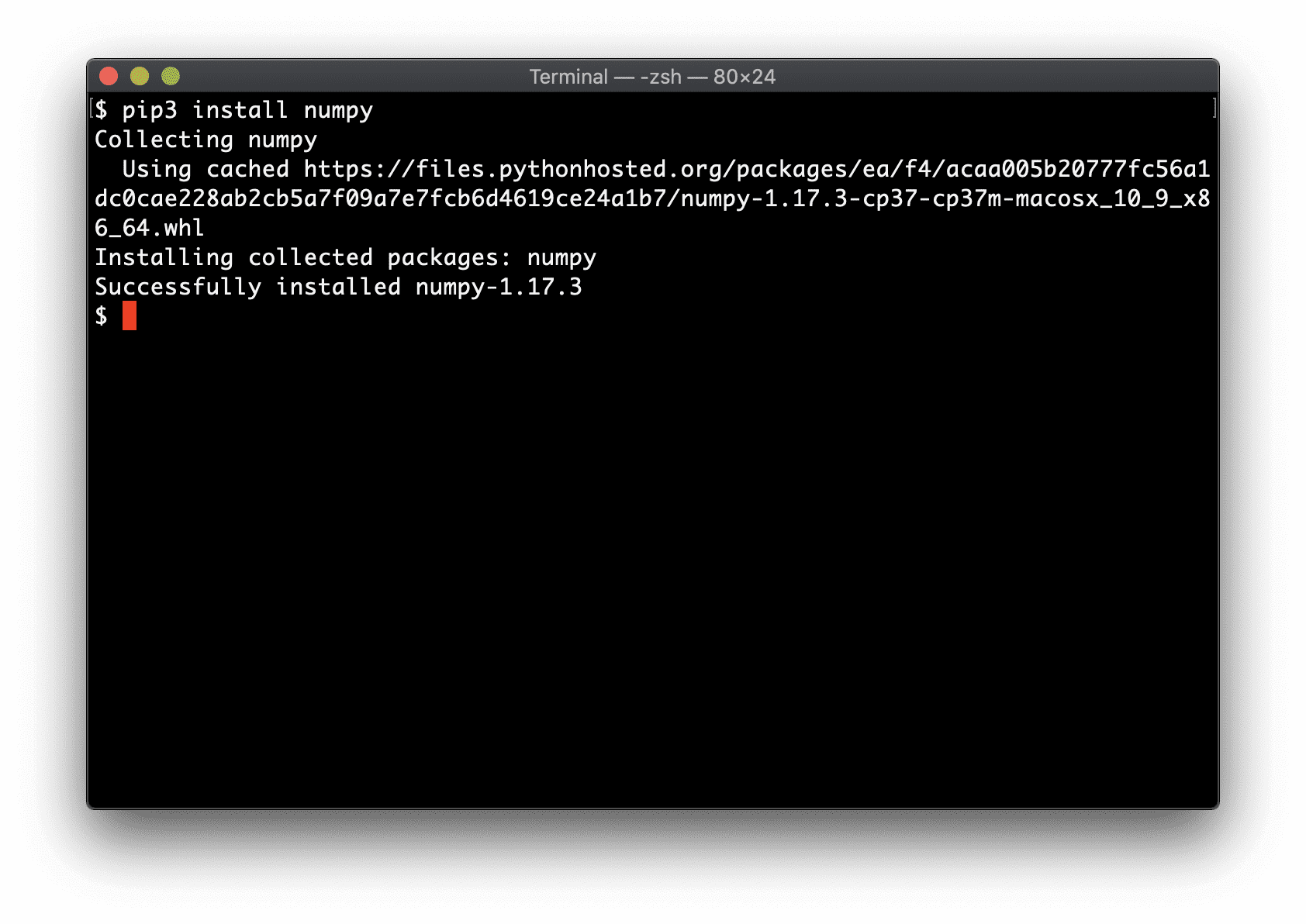 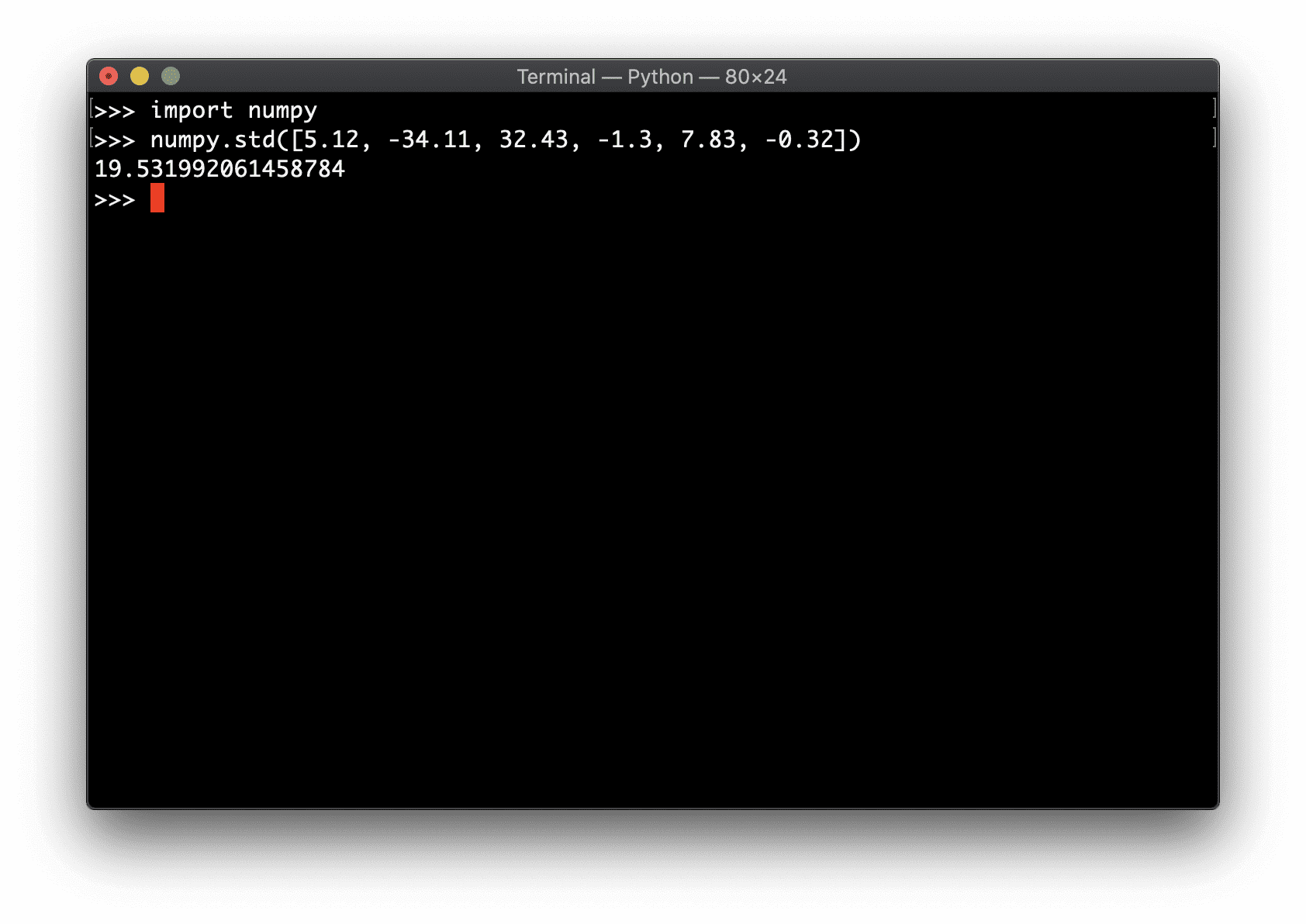 If you want to compute a sample standard deviation using the NumPy package, you will have to pass an additional argument ddof with a value of 1. ddof stands for delta degrees of freedom, which is a statistical notion used in estimating statistics of populations from samples of them. 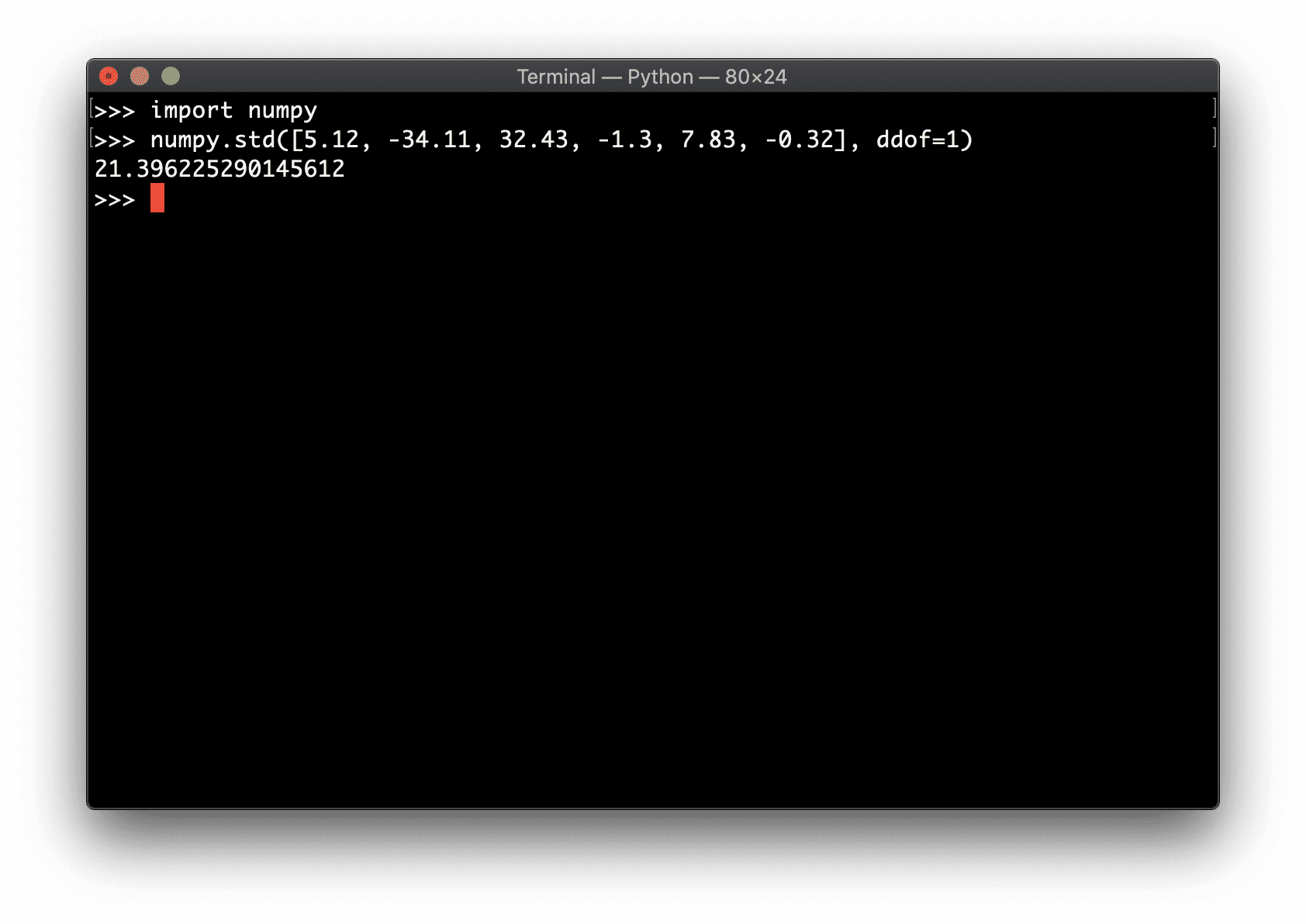 Calculate for an array

If you work with large data sets, Python arrays may be more convenient than its more popular lists.

In the example below, we also pass a d argument to an array constructor to indicate that our values are of type double. 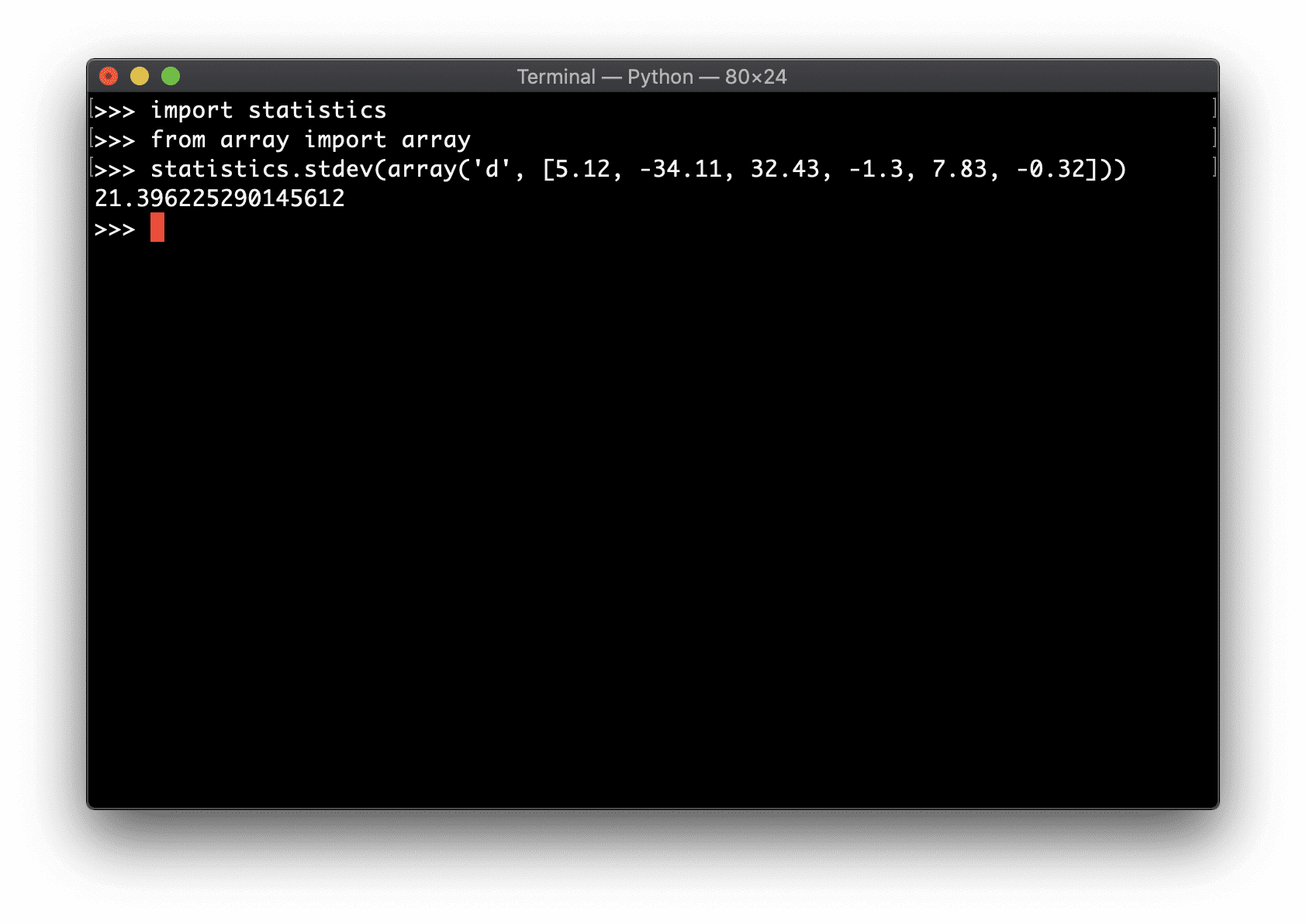 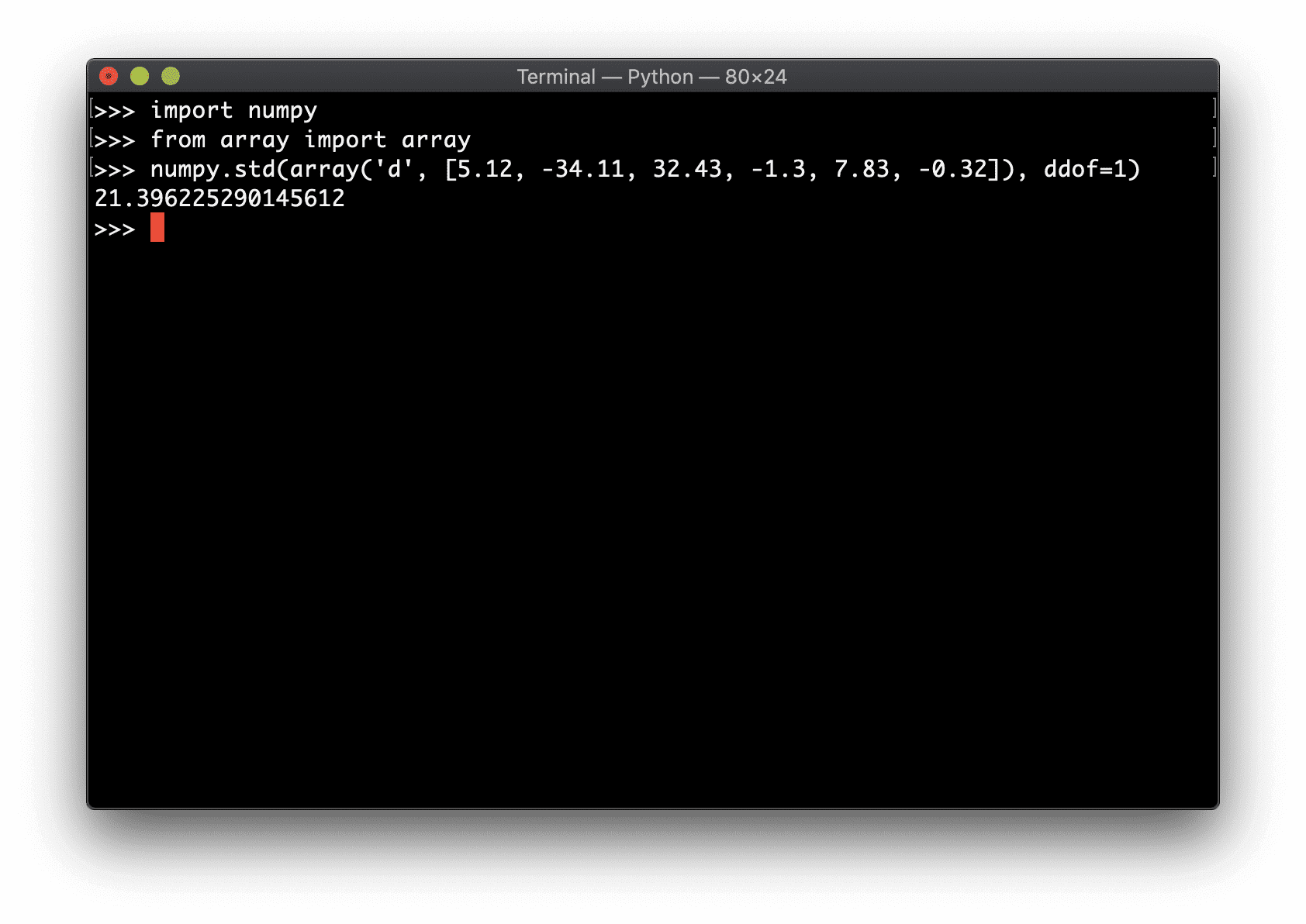 For example, you can have a data structure, which maps students to their test scores, as in the picture below.

If you want to compute a standard deviation of the test scores across all students, you can do it by calling statistics.pstdev on the dictionary values, without the keys. For that, call Python’s built-in dict.values() function. 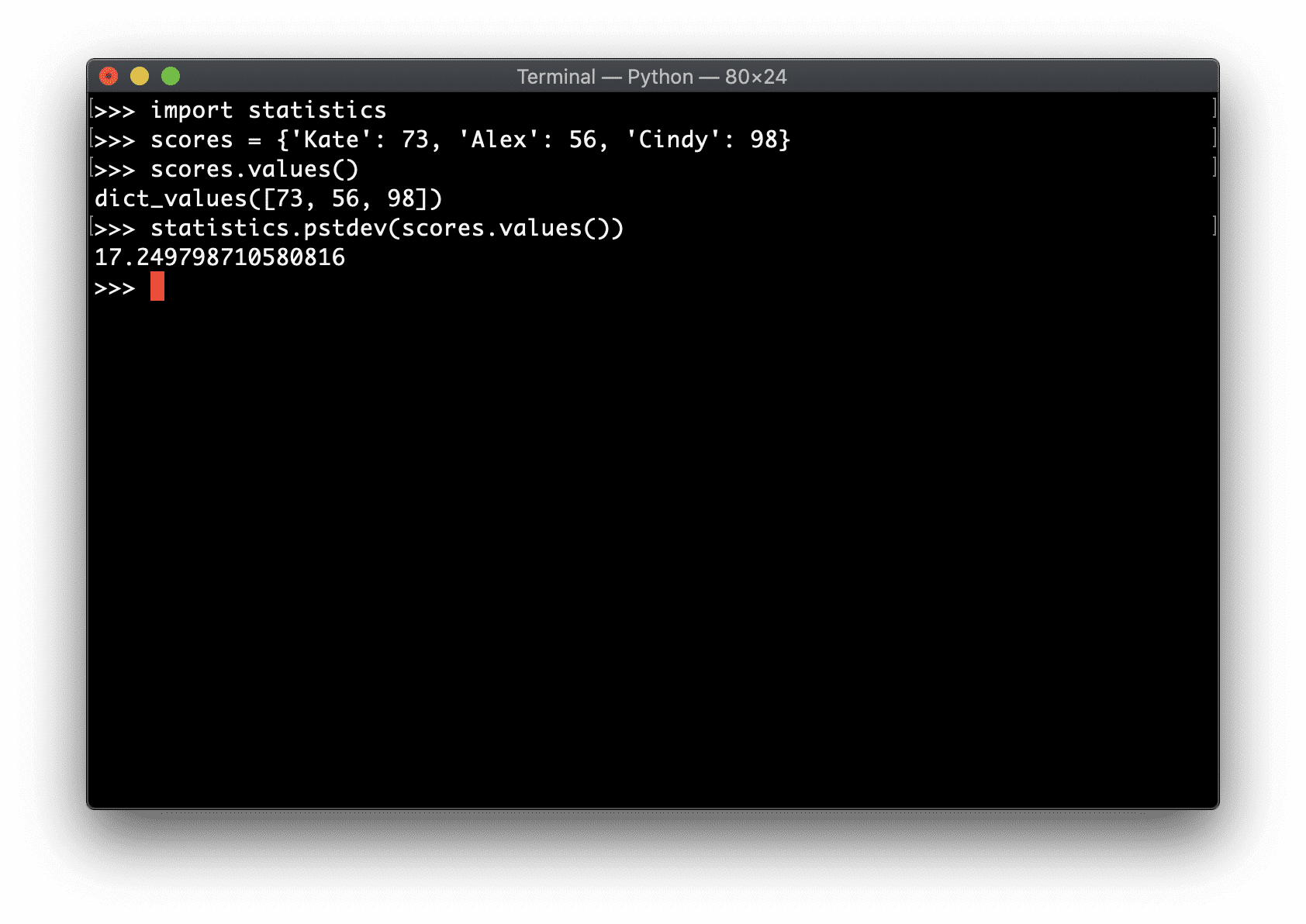 Calculate for a matrix

With matrices, there are three ways to compute standard deviations. 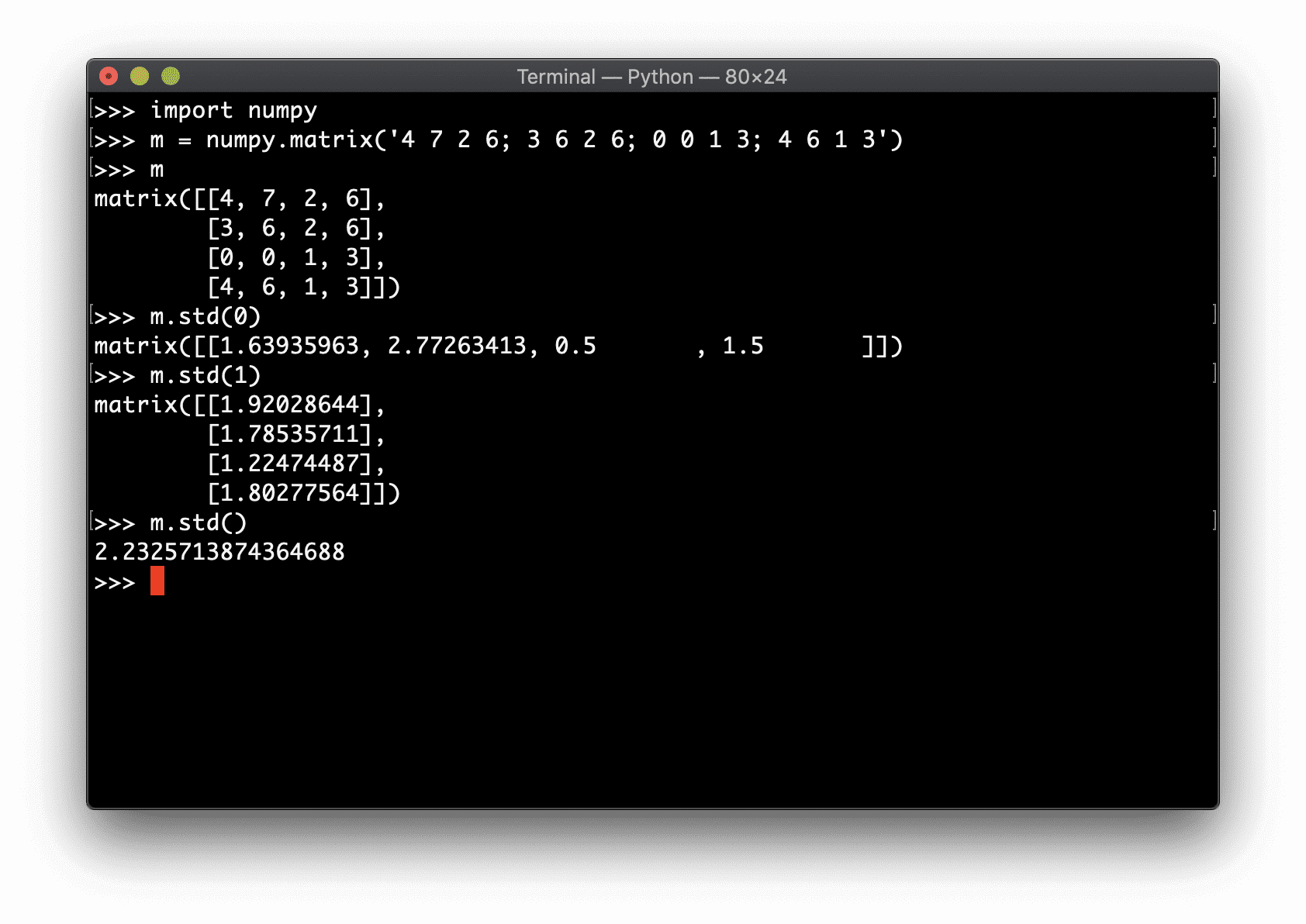 pandas.Series is a one-dimensional array with axis labels. It builds on top of numpy.ndarray.

One of its applications is for working with time-series data.

Calculating the sample standard deviation from pandas.Series is easy. 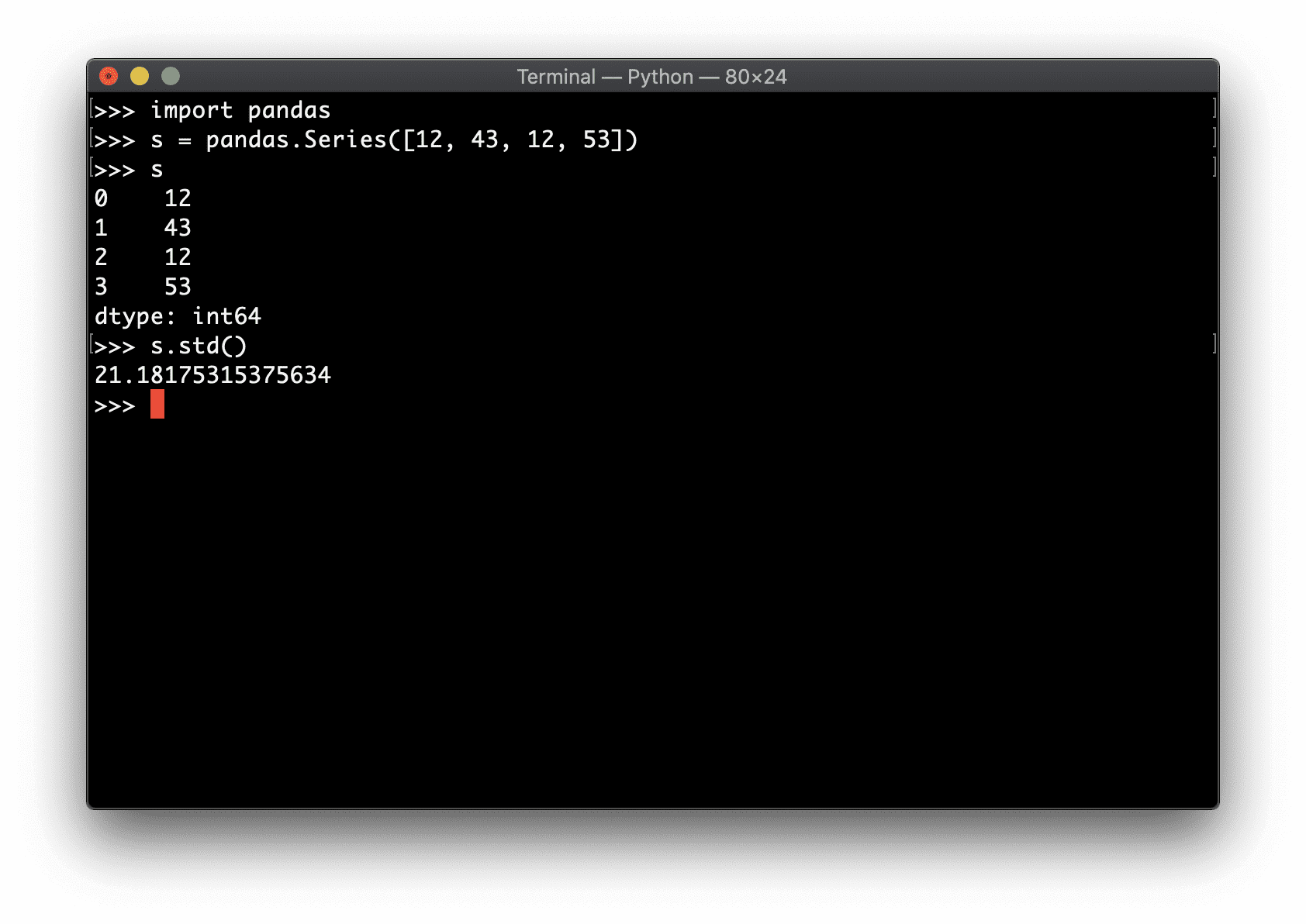 If you need to calculate the population standard deviation, just pass in an additional ddof argument like below. 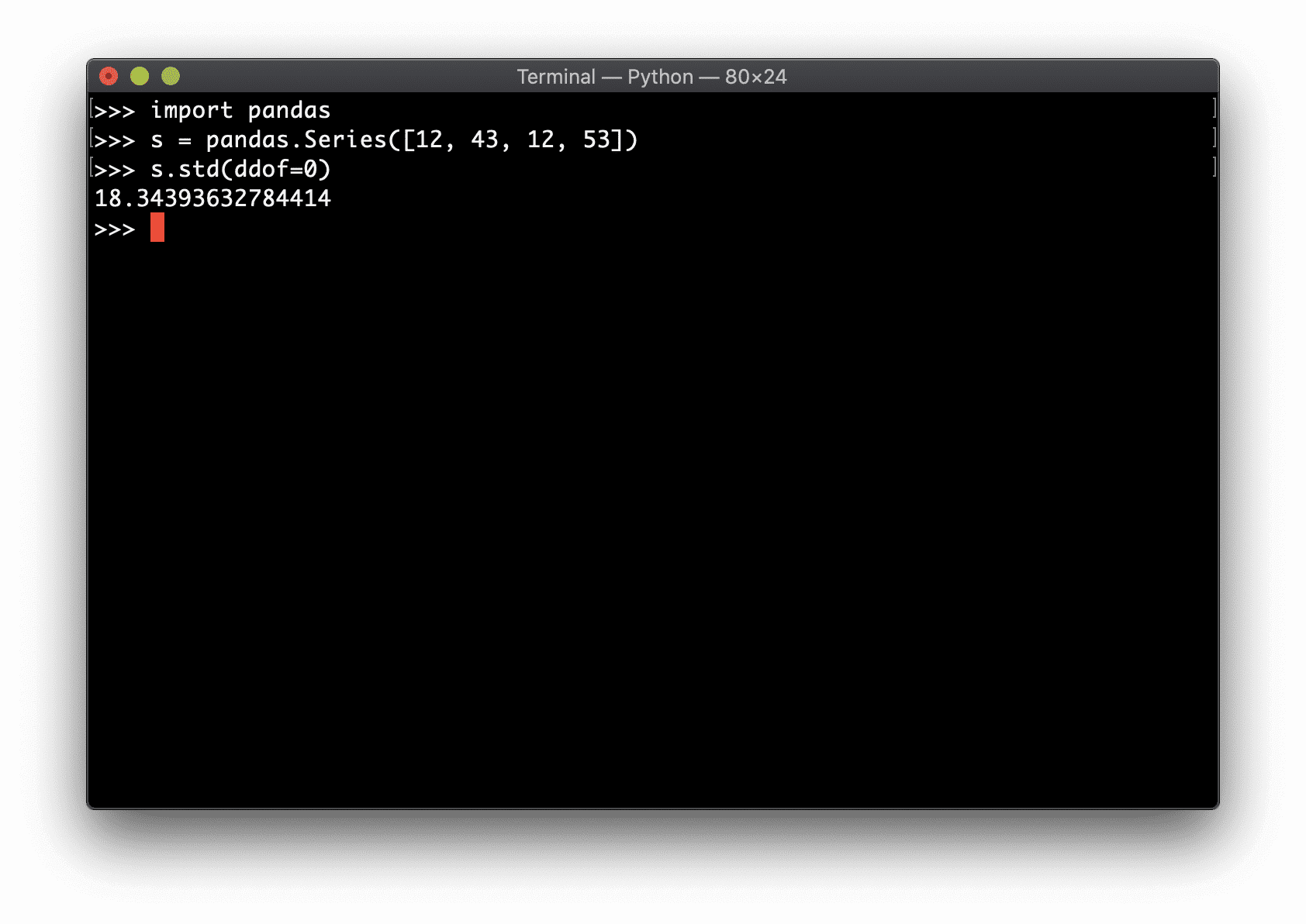 pandas.DataFrame is a two-dimensional tabular data structure, which allows us to easily perform arithmetic operations on both rows and columns.

Its closest analogy in pure Python is the dict data type.

Let’s create a DataFrame object that represents students’ test scores, as we did in the dict example above. 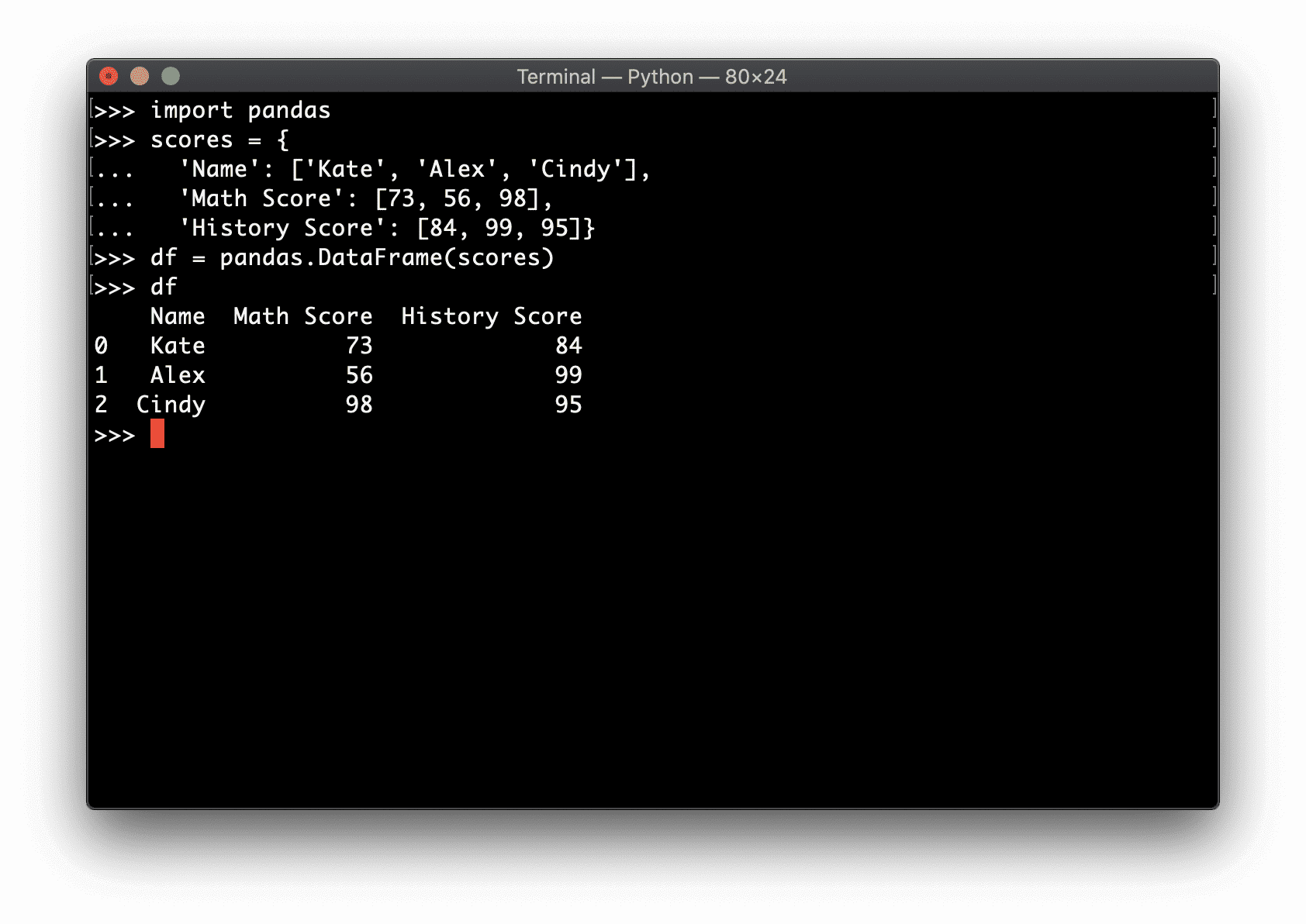 Now we can calculate sample standard deviations for each subject, namely Math and History. Note that it will be by-row calculations. 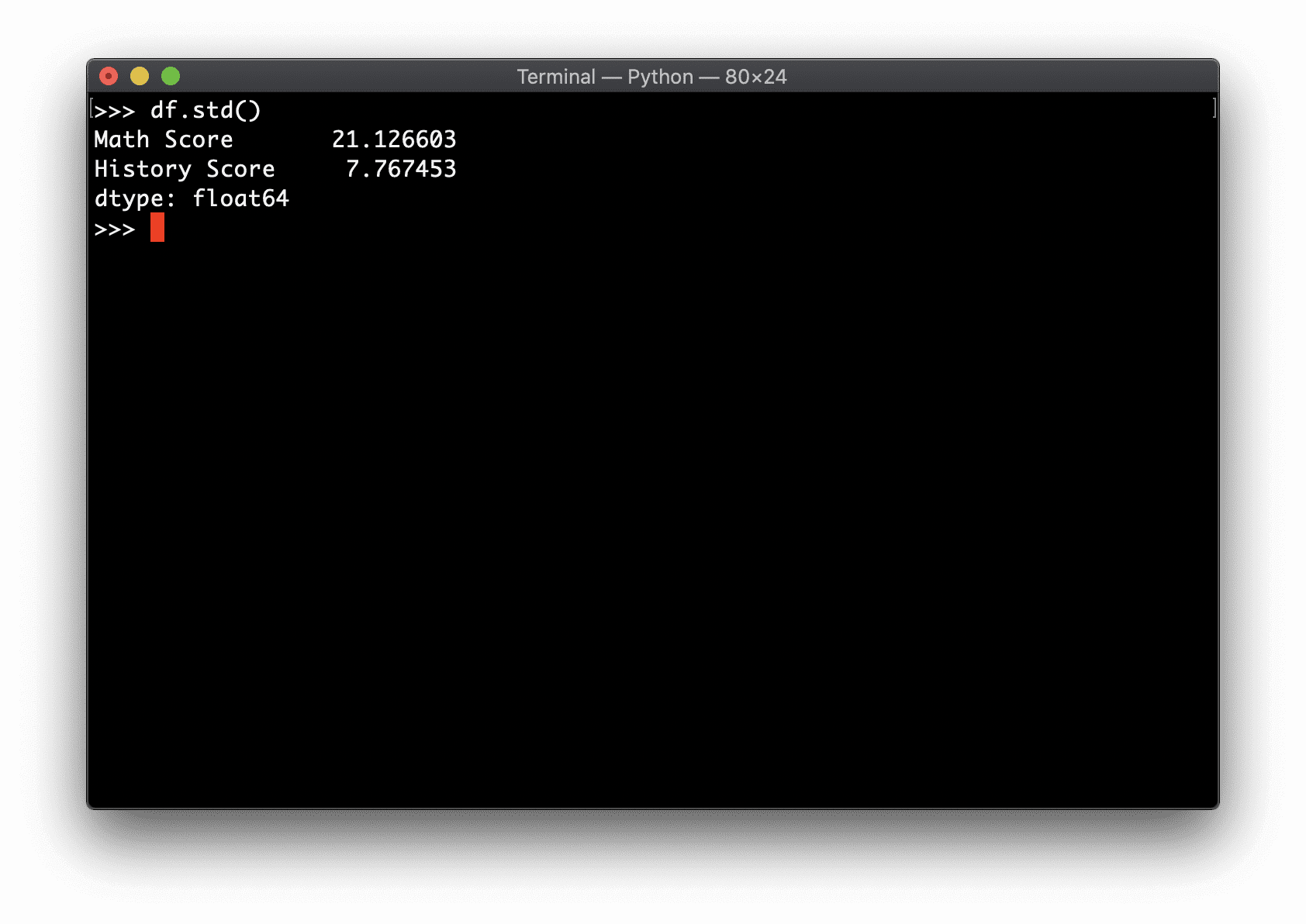 Alternatively, we can compute sample standard deviations by person. For that, we’ll pass an additional axis argument with a value equal to 1. Note, that in this case, it will be by-column calculations. 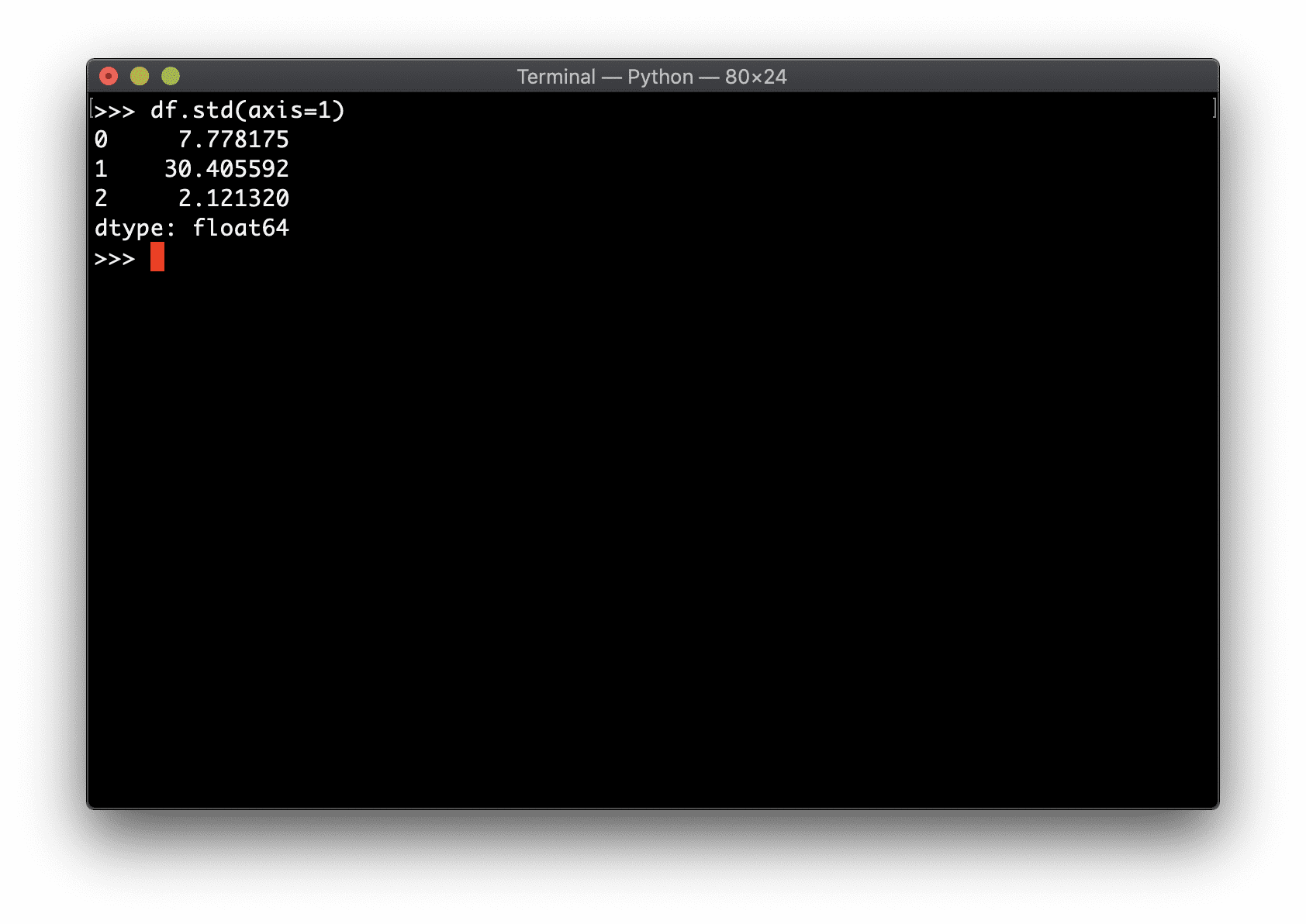 From the picture above, you can see that Alex has the highest standard deviation of 30.4. It makes sense because the spread in his scores is much bigger compared to Kate and Cindy. 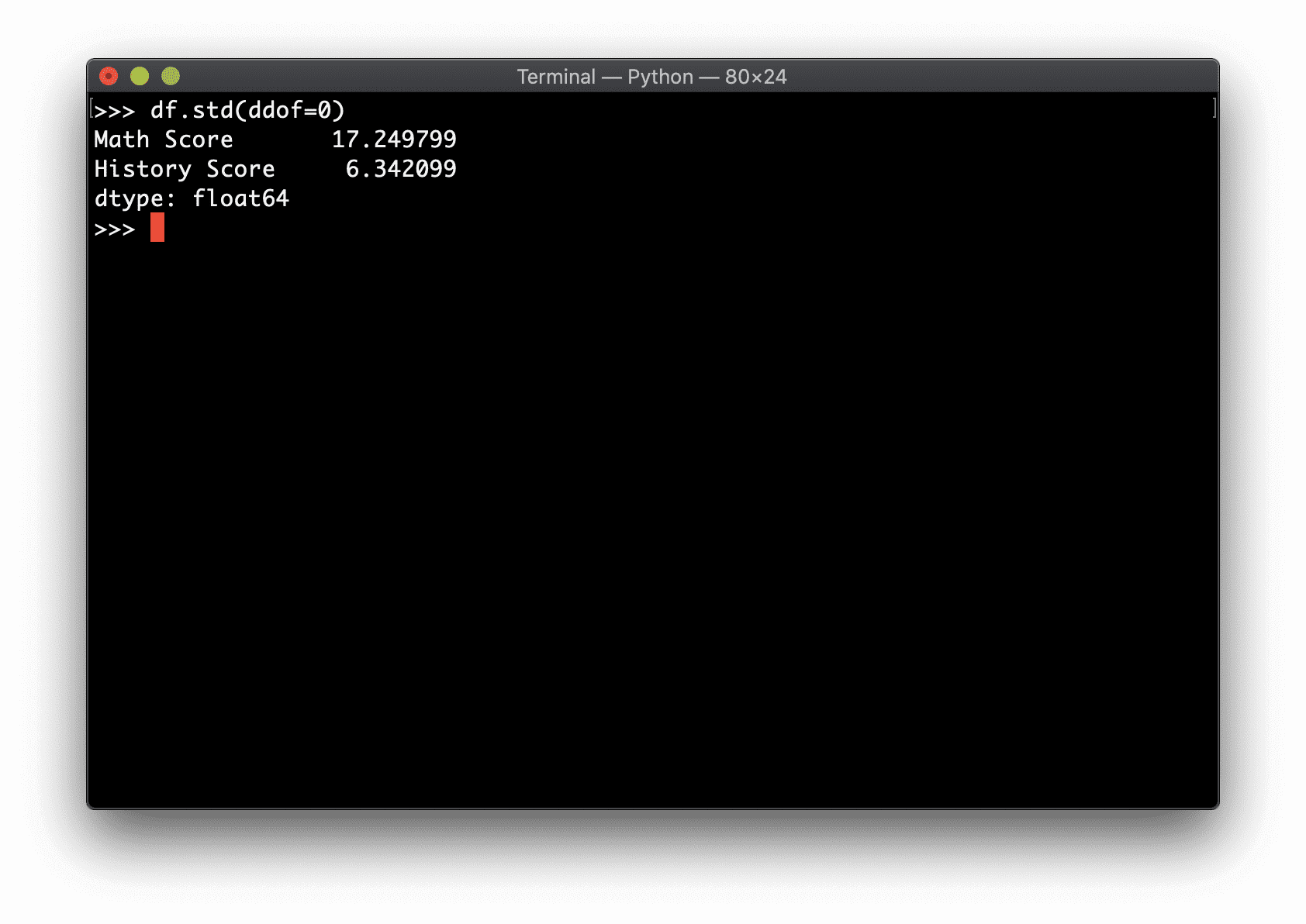 In the following three sections, we will focus on telling the differences between standard deviation and other statistical aggregate measures such as mean, average, and median.

What is the mean? The mean number is just an abstract concept that tries to estimate an average value in a data set. It’s obtained by summing up all numbers in a data set and dividing the result by the quantity of these numbers (i.e., the size of the data set).

Below is an example of how you would obtain a mean number for a data set. You can also see that the standard deviation value for this data set is quite different from its mean value. 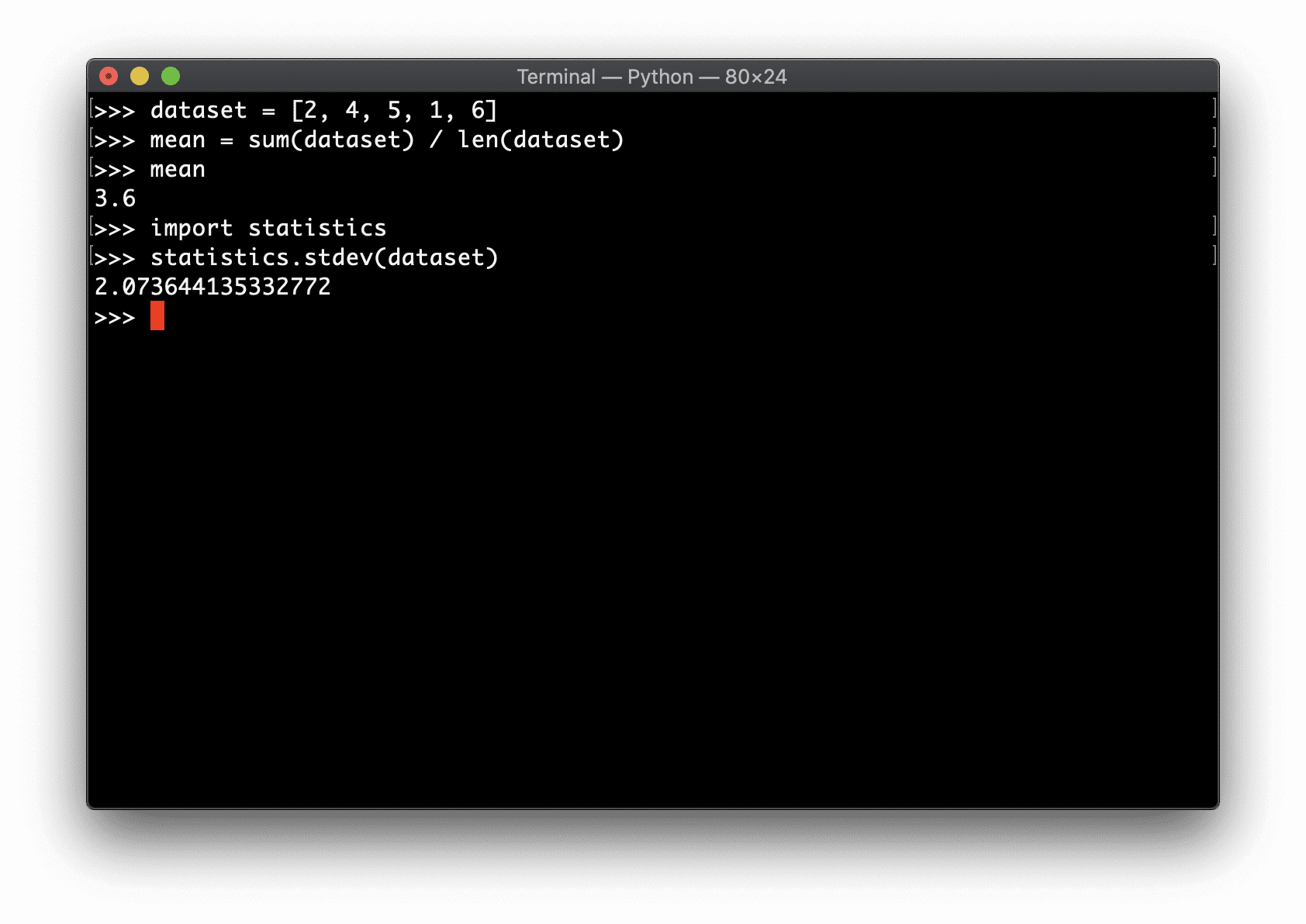 Median is another aggregate measure in statistics. It is meant to express the notion of an average number. However, it’s different from the mean number.

You can see that four falls right into the middle of this sorted data set. Such number, which stands in the middle of a data set after we have arranged it in non-decreasing order, is called the median value of this data set.

Below is an example of calculating the median value for a data set. Note that it’s again quite different from the standard deviation. 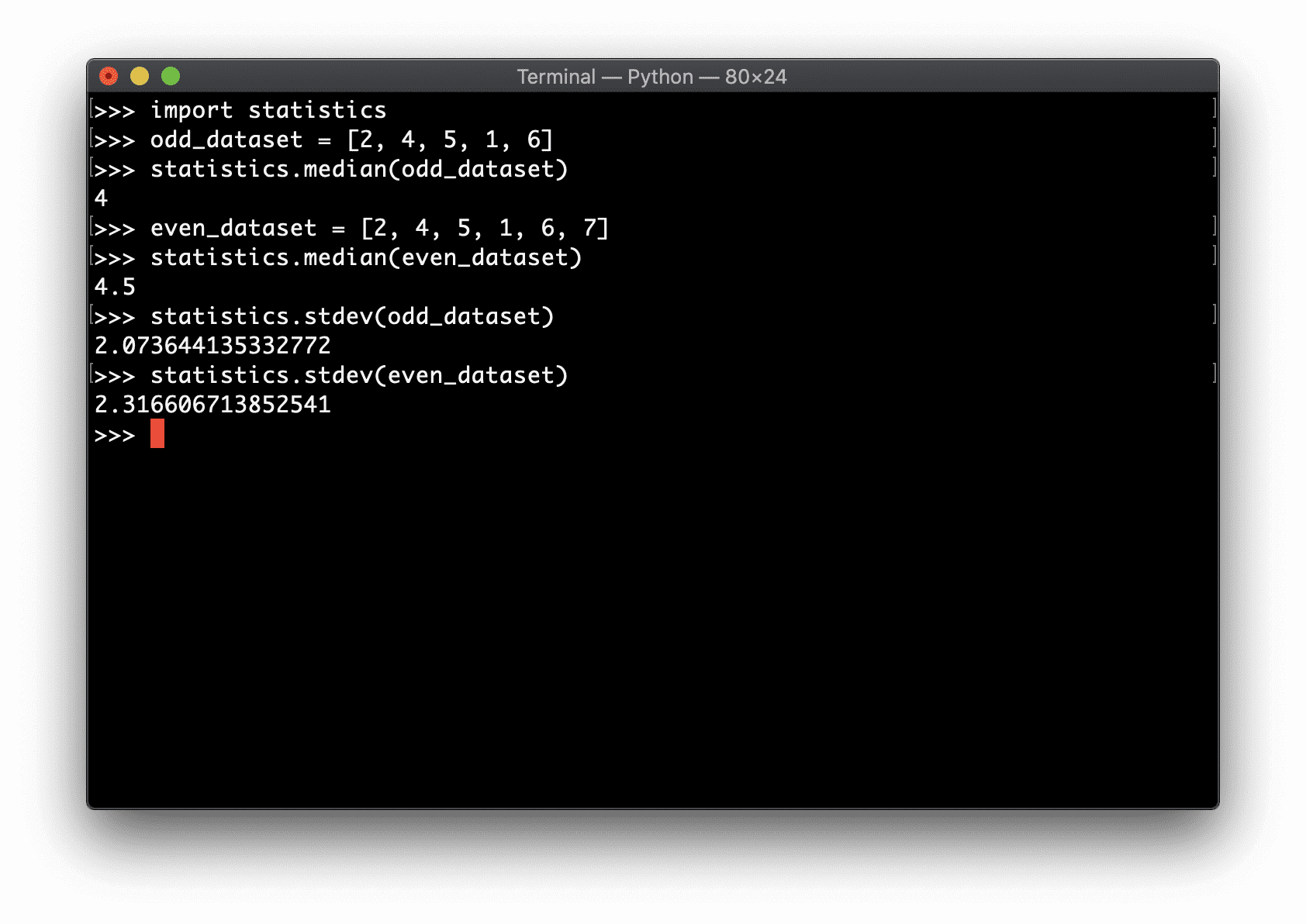 Below is an example of how one can compute the pooled standard deviation. 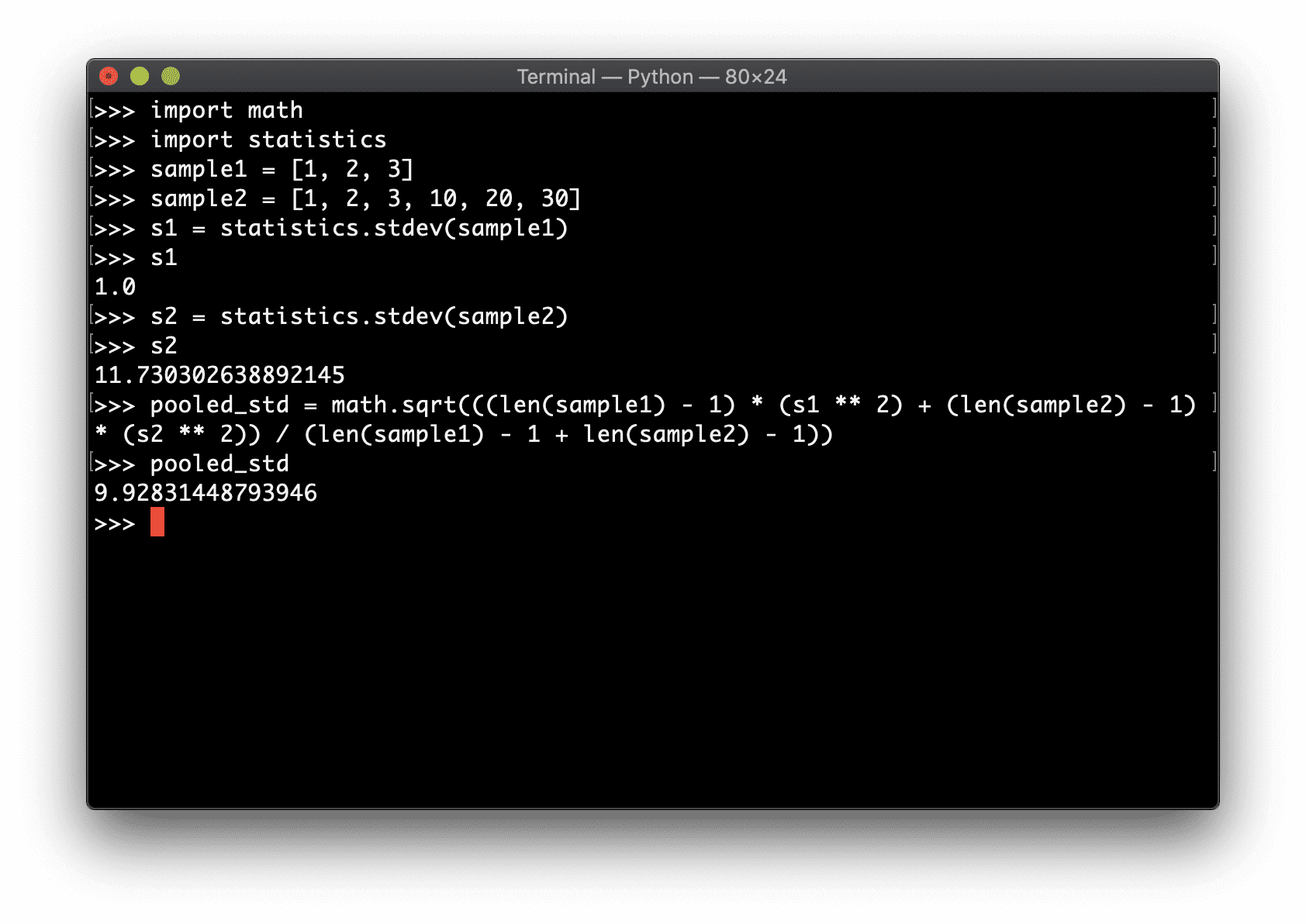 If you want to plot statistical data in Python, you can use the matplotlib 2D plotting library. 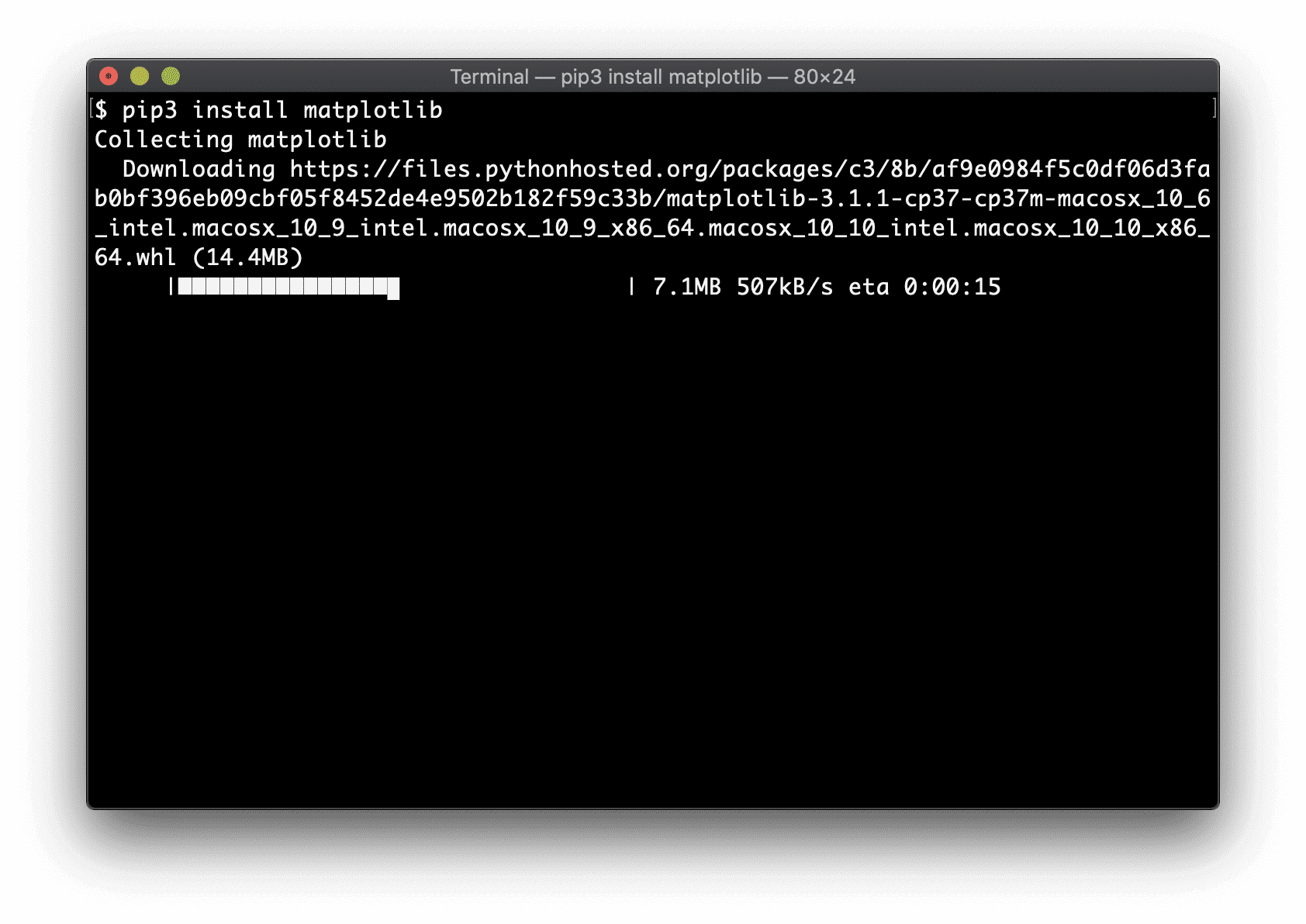 Let’s create a plot of mean values of students’ scores by subject and use standard deviation for showing our confidence ranges (also known as error bars).

Let’s prepare the data as in the example below. Compute means and standard deviations of scores by subject. 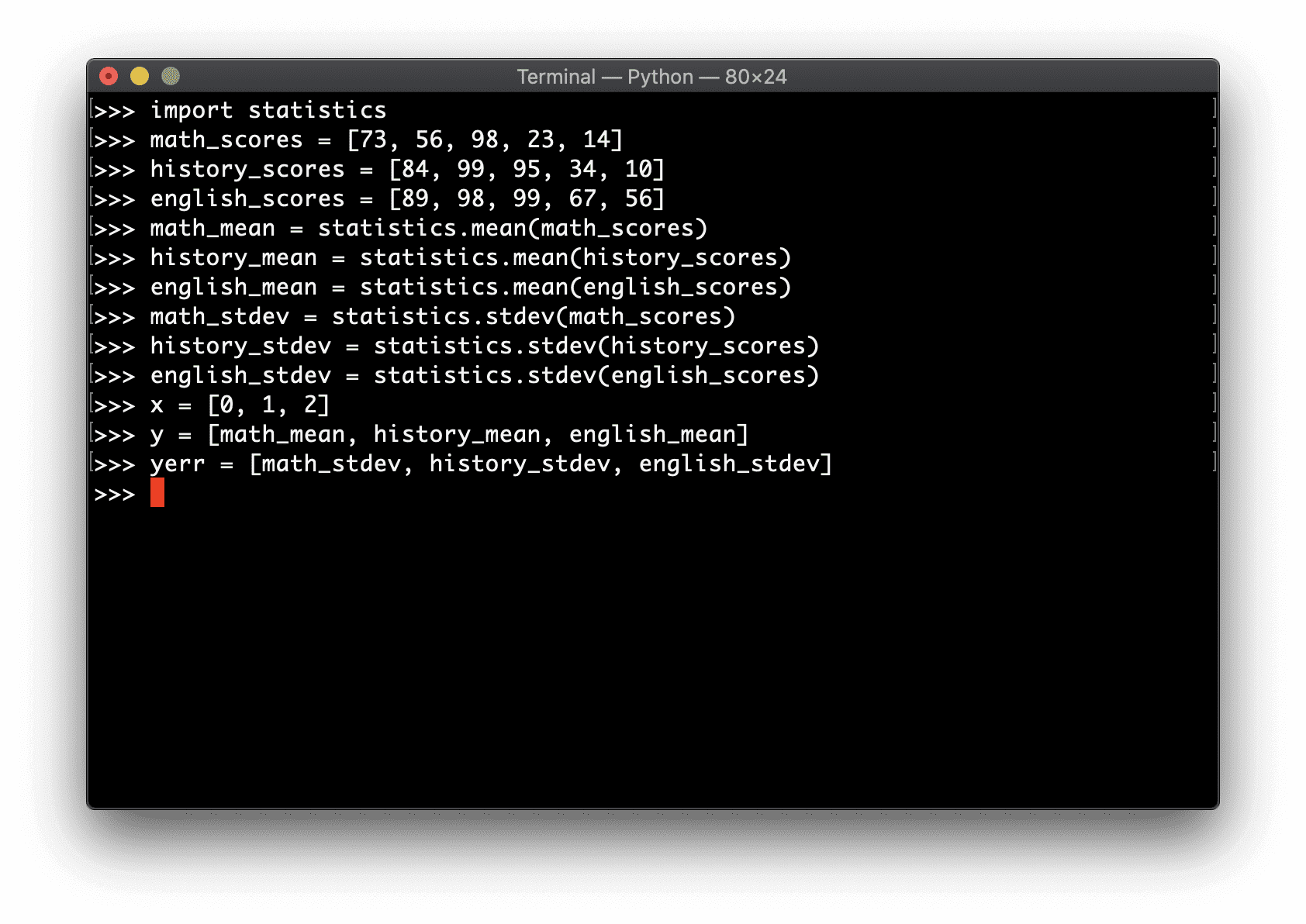 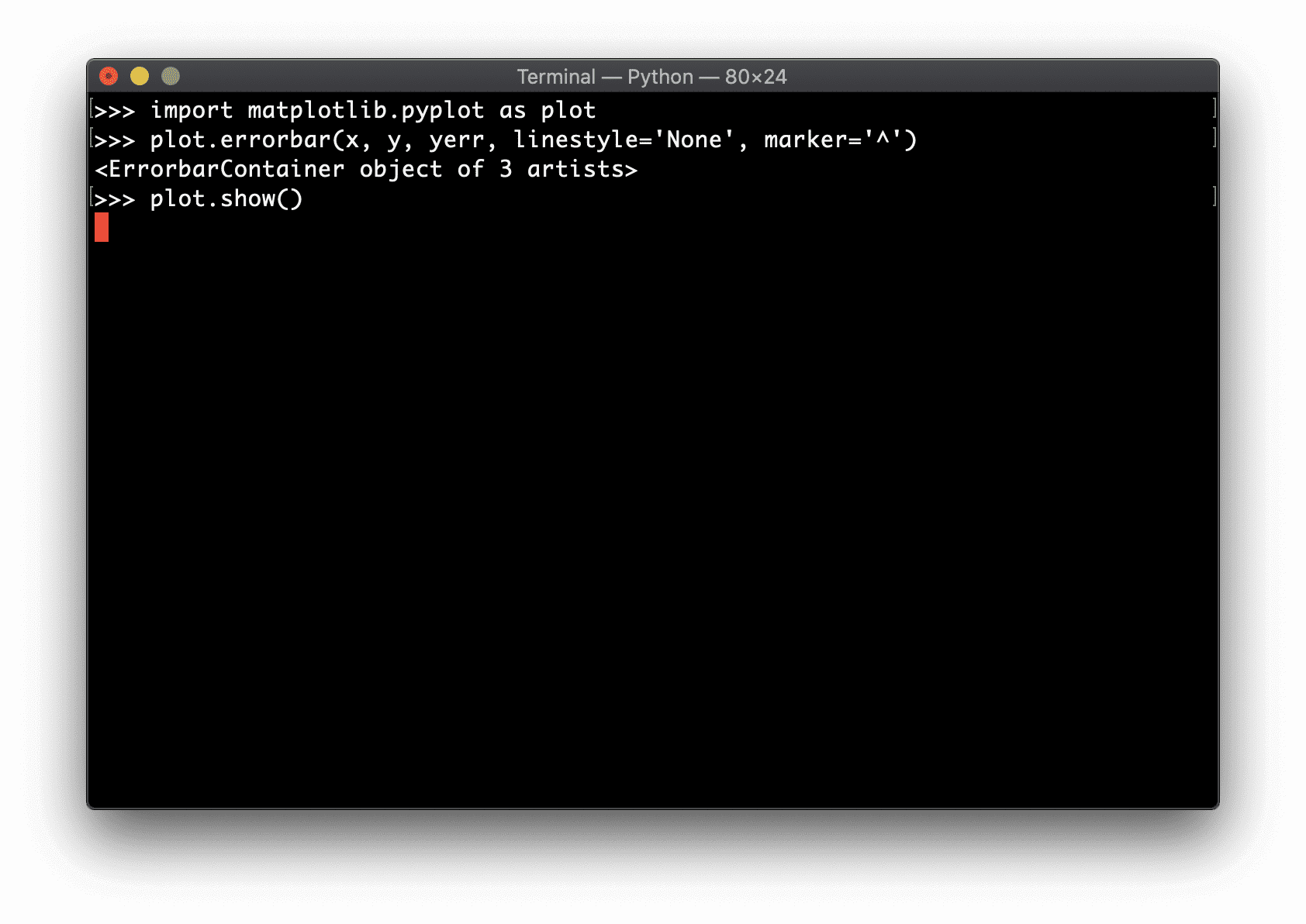 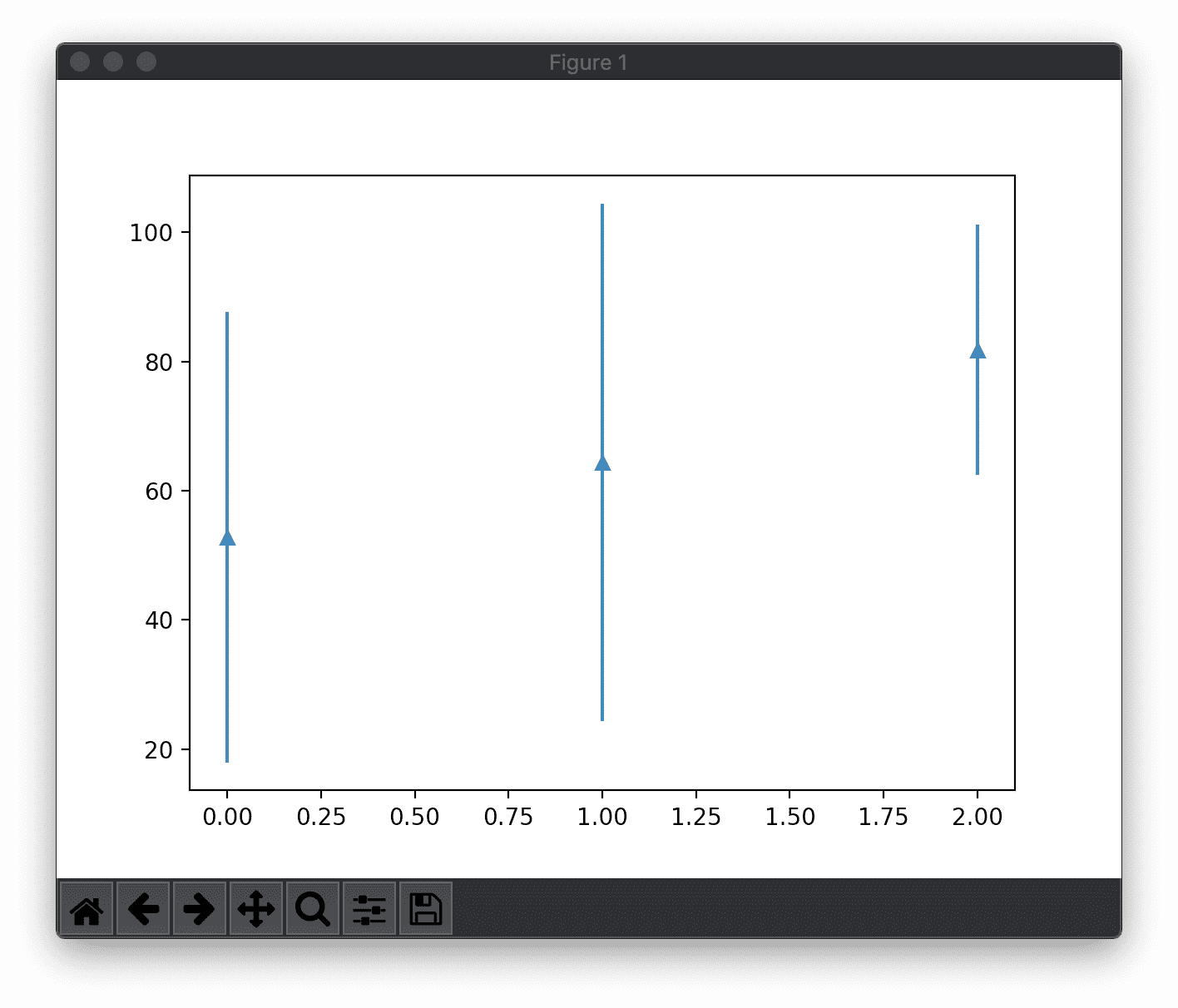