Testing an application before launching it into the market is essential to check whether your program works fine or crashes unexpectedly under certain conditions.

Testing the code increases your or the team’s confidence that your code is behaving as per your expectation.

Application testing thus became a standard skill every programmer must have to become a competent application engineer or a full-stack developer.

This article will give a complete knowledge of Python’s code testing through the Python pytest module.

What is Python pytest?

Pytest is one of the most popular testing frameworks that help developers efficiently write, test, and check applications, APIs, and libraries in Python.

This testing module provides scalable test cases for Python apps that use databases, dependencies, and UI.

Pytest’s primary intention was to allow you to write test codes for APIs.

It enables you to write test cases ranging from simple unit testing to complicate functional testing. It is a matured, feature-rich testing tool, which comes with some exceptional characteristics.

Installing pytest in your system is easy using pip. Simply open your terminal and type the following command:

Once the installation gets completed, you can confirm whether pytest got successfully installed or not. Use the help attribute of it using the command:

How to use pytest?

We can use the assert keyword that helps in debugging code or check whether a particular assertion or test will succeed or fail. Assertions return either True or False based on the success or failed test.

Also, we need to import the pytest module in our program using the import statement. Here is a code snippet showing how to use it.

You can run pytest with a specific Python version by using the pyenv module. Incorporating pyenv in your module will allow you to switch between different versions of Python.

Hence, you can test all the associated projects of those versions using the pytest.

Fixtures in pytest are a means of delivering data, test replicas or creating a state setup for your tests. These are functions that help in returning a broad spectrum of values.

Each Python program test that depends on a fixture has to acknowledge the fixture explicitly as an argument.

You can use fixtures instead of class xUnit testing style setup & teardown techniques wherein a particular part of code gets executed for each test case. The primary reasons for using the Python Fixtures are:

Fixtures are good when we want to extract the test object where we want to use multiple test cases. But in most cases, our program needs a little bit of modification in data.

There, the fixtures are not proven as the best solution.

Fixtures are the most powerful features of a pytest. Through fixtures, you can define or set up certain pre-configurations, conditions, and layouts to your test script file for checking various application features like a database connection or handling data through APIs from other sources.

Now, if we wish to share the fixtures to multiple files, there we will need to use the conftest.py file.

If we specify the Conftest.py file in our scripts, then we can access all the test classes & their associated modules from our project directory so that we can share all configurations & optimize our script.
Example:

We can pass arguments to test a program that gets invoked via the command line argument. Here is a code snippet showing how to do it.

Now change the content of the confest.py file with the following code:

Often we do not need specific methods or sections to test because they are either in the prototype stage of development or that particular feature becomes obsolete and is no longer in use.

So, we skip those modules. Since pytest can be used for creating test cases, we can skip a selected testing method from getting executed in pytest.

The test file method comes with a naming convention that starts with test_ or ends with _test keyword. Every line of code that needs to be inside a method will have a name starting with the test keyword.

Also, it is mandatory that each method must have a unique name. Now comes the role of a pytest marker.

A marker helps in setting metadata, such as different properties, characteristics & attributes for test functions.

The markers remain attached to the test function(s) in the form of function decorators that programmers have to mention along with them.

Some built-in markers that pytest programmers should use are xfail, skip, etc. In this case, we have to use the skip marker in the pytest decorator to skip a method.
Syntax:

Here is a code snippet showing how to do it.

Often pytest fails when the conditions or any particular logic do not meet the requirement as expected or as provided in the test cases.

Pytest will highlight a failed test with descriptions and pointers on where the test assertions did not meet the requirement.

For tests that fail, pytest generates a detailed report of the breakdown as a failure.

Here is a code snippet that tells us that the assert statement leads to failure because the left hand side and the right hand side value/constant did not match (as the == operator relates both side). So, it generates false and the test failed. 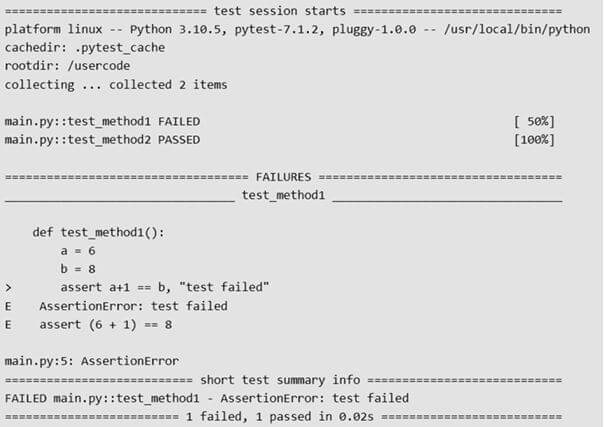 While a failed test will generate reports of where the test fails, a pytest error in the test allows you to handle it by raising an exception. Here is a code snippet showing how they differ. 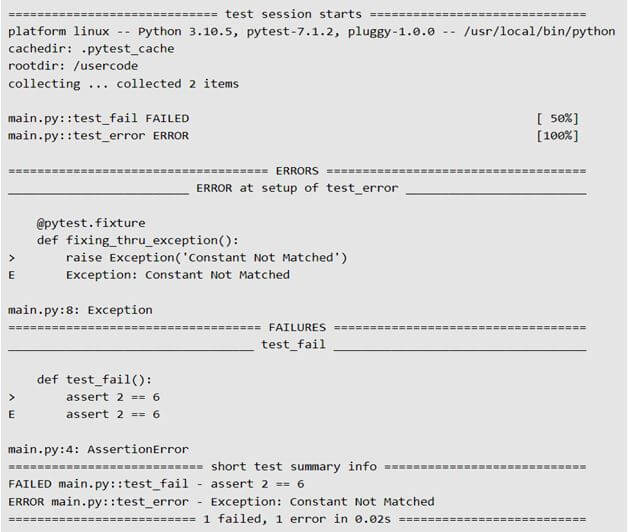 For generating a test report as an HTML file with the Pytest framework, we should install a separate plug-in (pytest-html) that will work with the pytest module.

For installing, we shall execute the pip command:

Once you execute this command and all the test cases got passed, or got skipped, or show warnings but run, you can see a file name “report.html” that has been generated within your project directory.

If you are using IDEs like PyCharm, you can easily check that out in the left window pane of your IDE.
Output

Now, if you open this HTML file, you can see the details of the test along with the environment where the program got tested, the number of test cases passed or skipped, etc.

Plug-ins play a significant role in doing additional tasks along with the pytest module. As we have seen in the previous example, the pytest-html plug-in can generate an HTML report for pytest.

Here is a list of a few more pytest plug-ins that we can use while implementing the pytest framework for testing.

There has a proper difference between pytest and unittest modules.

We hope this article has given a crisp idea of what the pytest module does and how to use it. We have also gathered insight on how to install it and pass arguments in the command line for testing.

Then, we discussed its fixtures and markers and understood when a test failure occurs.

Finally, we have generated a report and discussed the well-known plugins through which we can work while dealing with pytest.

Gaurav is a Full-stack (Sr.) Tech Content Engineer (6.5 years exp.) & has a sumptuous passion for curating articles, blogs, e-books, tutorials, infographics, and other web content. Apart from that, he is into security research and found bugs for many govt. & private firms across the globe. He has authored two books and contributed to more than 500+ articles and blogs. He is a Computer Science trainer and loves to spend time with efficient programming, data science, Information privacy, and SEO. Apart from writing, he loves to play foosball, read novels, and dance.