Have you been using for loops to perform repetitive tasks on a list of items in Python?
Did you wish there existed a more efficient way to apply functions to every item in a Python list?
If you answered yes, you are yet to discover an important and powerful tool in Python – the map() function.

In this tutorial, we will uncover the capabilities of a map function that helps us not only implement more efficient iterations than for loops but also helps us write clean code.

What does the map function do? 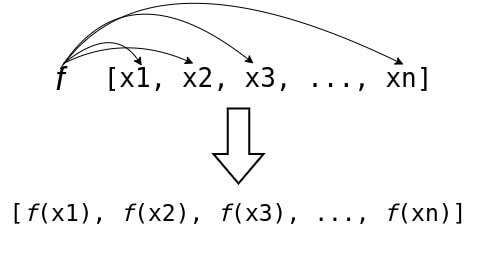 Let us consider a Python function to convert a temperature in Fahrenheit to its Celcius equivalent.
We will apply this function to a list of temperatures collected from, say different cities.

Here, we have taken a traditional approach of iterating over a list i.e using for loop.
We first created an empty list temp_celcius and then inside the for loop, we are accessing every item in the list temp_fahrenheit.
We call the method fahrenheit_to_celcius on these items and append the result to temp_celcius.

Let us see how both these steps can be replaced by a single call to the map function.

Notice how we have eliminated the for loop and initialization of the empty list and replaced them both with a single call to the map function.
We are using the method list to convert the returned map object into a list. We could have equivalently used the tuple() method if we wanted our result to be a tuple.

As discussed earlier, the map method can be called on any valid Python iterable, such as tuple, string, dictionaries, etc.
Let us take an example of its usage on a tuple.

Here we will use the map function to apply the str.lower method to a bunch of names stored as strings in a tuple.

Here we did not pass a user-defined function like earlier. We instead passed an in-built method of the string module in Python.

Note we must pass the function name (without parentheses) and not the function call, as the first parameter to map.

So far, the individual values in the iterables on which function was being called, were single scalar values.
We can also apply the map function to nested lists. Here, the function we pass to map will accept a list(or tuple) as its parameter.

Let us consider a list of names of individuals. These names will not be stored as single strings.
They will instead be defined as a list of 2 strings, the first of which will store the first name, and the second element in the list will be the last name.

We will define a function that accepts a list carrying the first name and the last name, and returns a single concatenated string representing the full name of the individual.
We will use map to apply this function to all the names in the list we defined above.

We have seen the usage of map on lists, and tuples. Let us now understand how we can leverage the function to process dictionaries.
Iterating over dictionaries is not as straightforward as it is with lists, tuple, etc., because dictionaries store a collection of key-value pairs.
If you use a for loop to iterate over a dictionary variable, the iterator variable will be assigned a key of the dictionary during each iteration.

Let us understand this by defining a dictionary electricity_bills whose keys are consumer ids of customers of a power company, and values are tuples carrying the consumer name and a list of electricity bill amounts of the last 6 months.

Thus we got a list of tuples, each having consumer_id and the average monthly bill.

We can similarly call the values() function on the dictionary if we want to process just their values.

So far, We have been passing a single iterable to the map function, along with a function that expects a single argument so that the individual items from that iterable are passed to the successive function calls.

We will define two separate lists of equal lengths and pass them to the map function along with the method to calculate gcd.

Note that the two lists have to be of the same length because the parameters are passed to the function pairwise, one each from the two lists.
If the two lists are not of the same length, then the minimum possible pairs will be processed and the extra elements in the longer list will be discarded. The result in such a case would be of length matching the length of the smaller list.

Note that the two (or more) iterables we pass to map do not necessarily have to be of the same type.
That means if one iterable is a list, the other one could be a tuple, and the third one could be a set, and so on.

Let us define a function that accepts 3 values – name of a student (string), their roll no. (int) and cgpa (float), and returns a dictionary having each of these items labeled by their keys.
We will pass this function to the map function along with 3 iterables. 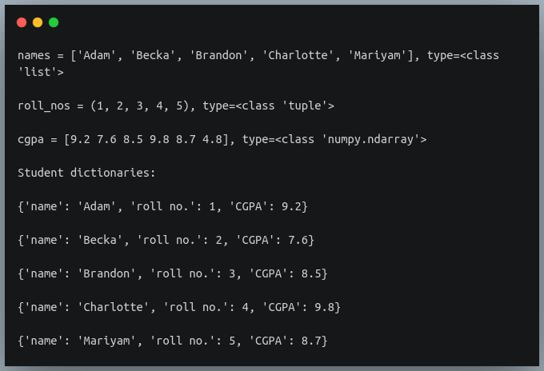 There are a couple of things to note here:

Until now, We have been defining the function to be passed in advance before calling the map function.
But Python map function’s true potential is realized when it is used with lambda functions.

Let us first understand what lambda is.

Our typical way of defining a function, using the def keyword, involves declaring the function with a name. We need to define such a function only once, and we can use it as many times as we want, at different places in our program.
An anonymous function, on the other hand, is constructed without a name and is generally not meant to be reused at multiple positions.

The syntax for lambda function declaration is: lambda arg1, arg2,... : expression
A lambda function can accept more than 1 argument, but its return value has to be an expression. That means, it cannot have multiple Python statements like a normal function before returning a value.

Let us define a lambda function to find the square of a value.

Note that a lambda function doesn’t have any explicit return statement, the ‘expression’ that we specify is evaluated and returned by the function.
Also note that though we have assigned the lambda function to a variable called ‘square’, it is not necessary to do so and is done here only for convenience.
We can very well define a lambda function and call it at the same time, without assigning it to any variable.

Lambda functions are particularly useful where we have to pass function objects as parameters to other functions, like in the case of map.

Let us now call map with a lambda function to calculate square roots of all the numbers in a list.

Let us also take an example of a lambda with multiple arguments.
We’ll define a lambda that accepts two arguments and returns their product.
We will then use this in a map function with two lists, to find pairwise products of the values in the two lists.

map with conditions in lambda

In the previous section we discussed that we cannot use normal Python statements in a lambda function, and we have to represent the return value as an expression.
If we have to use if..else construct, however, we can include them as part of the expression using the following syntax:
lambda args: val1 if condition else val2

Let us understand this by defining a lambda function to find if a given value is even or not. We can use it on a list of numbers using map.
The result will be a list of boolean values indicating whether the corresponding values in the list are even or not.

We have been using map to construct a list by applying a function to individual elements of a list.
There exists an alternative way in Python to construct such lists called. It is called list comprehension.

List comprehension is a shorter, more elegant way of constructing a list than a for loop.
With list comprehension, you can construct a list on the go wherever you need it without having to initialize an empty list and then appending values to it.

Let us now use list comprehension to replace the map function in our first code example of this tutorial.

In this example, defining the function fahrenheit_to_celcius was still the part common with using map.
However, if we consider map with lambda functions, we can get rid of lambda as well using list comprehension.
We can use the same expression that lambda uses to construct our list.

Thus we were able to do away with both map and lambda with a single list comprehension.

As far as the comparison between the two is concerned, list comprehension comes out as a more clean and syntactically more intuitive option than map.
It is also considered a more ‘Pythonic’ way of doing things than map.

Another advantage of using list comprehension is that we can use it to filter items from a given list based on some conditions
and construct a list of smaller lengths than the original list.
This is not the case with map where, for every item in the input list, an item has to be returned by the function passed.

Let us look at an example where we use list comprehension to filter out multiples of 5 from a given range of numbers.

This is not possible with map.

If we consider the time comparison between the two methods, map performs a faster execution than list comprehension.
The following image shows time logs of the two approaches run in a Jupyter notebook.

Finally, we compared map with list comprehension which is an alternative approach to constructing lists from an existing iterable.