In this post, you will learn about listing users in Linux. Besides this, you will know other tricks about Linux users’ characteristics.

What file contains the list of the users on Linux?

Before we start listing users, we need to know where these users saved on Linux?

The users are stored in a text file on the system called the passwd file. This file is located in the /etc directory.

The file is located on the following path:

In this file, you can find all the information about the users in the system.

Listing users is the first step to manage them. This way, we will know how many they are and who they are. In Linux, almost everything can be done in various ways, and this is no exception.

To list all users, you can use the cat command: 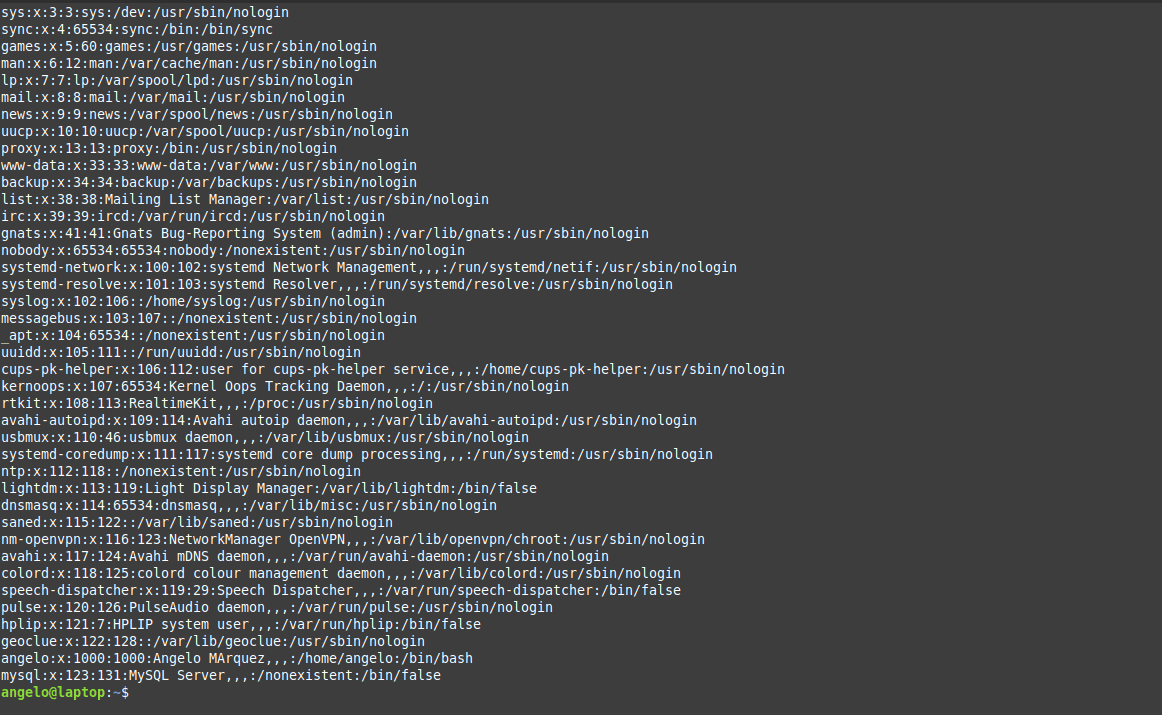 As you can see in the image, there is all the information about the users.

1- In the first field, you will see the user name.

4- The next field refers to the primary group of the user.

5- Then, it shows user ID info such as the address, email, etc.

6- After this, you will see the home directory of the user.

7- The last field is the shell used by that user.

However, although the information is quite useful, if you only want to list users’ names in a basic way, you can use this command: 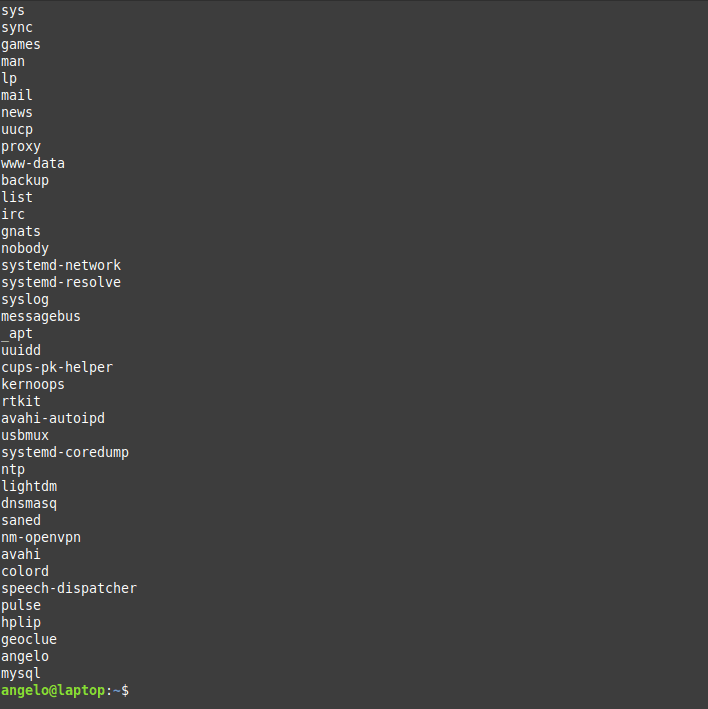 Now we have the names only by printing the first field of the file only.

The above command serves the purpose of listing users on Linux. But what about listing the users in alphabetical order?

To do this, we will use the previous command, but we will add the sort command. 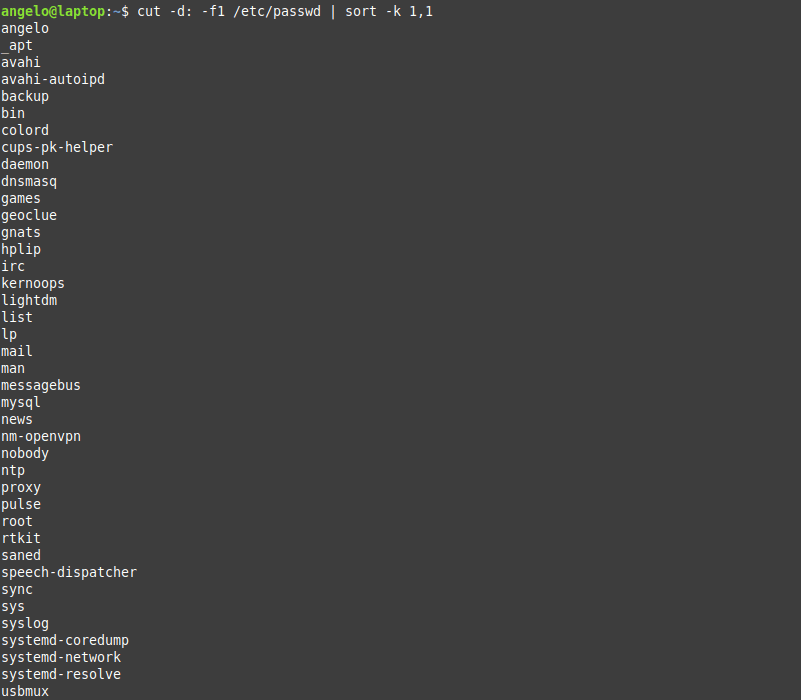 As you can see in the image, the users are shown sorted.

It is important to know users who have no password and to take appropriate action. To list users who do not have a password, just use the following command: 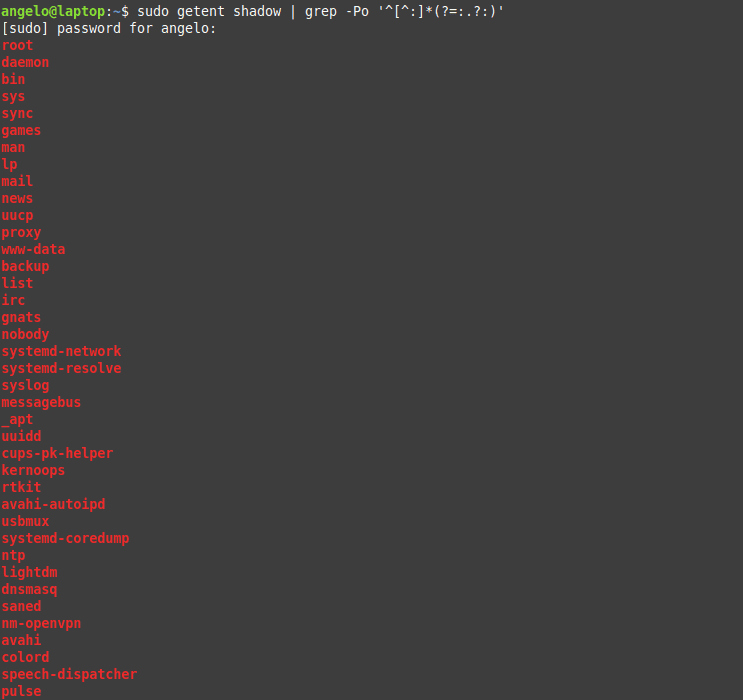 If you have a big directory and you want to know which user is flooding it, you can use the du command to get the disk usage.

With this, you can detect which of these users are misusing the disk space.

For it, it is enough to use the following command:

In this way, you will have the users ordered by the disk usage for the /home directory.

We used the -n for the sort command to sort the output by numbers.

To list the currently logged in users, we have several ways to do it. The first method we can use the users command:

It will list the users with open sessions in the system.

But this information is a little basic; however, we have another command that gives more details. The command is simply w.

With this command, we can have more information, such as the exact time when the session was started and the terminal session he has available.

Finally, there is a command called who. It is available to the entire Unix family. So you can use it on other systems like FreeBSD.

With who command, we also have some information about currently logged in users. Of course, we can add the option -a and show all the details.

This way, you know everything about the logged in users.

We saw how to get the currently logged in users, what about listing the login history of users?

You can use the last command to get more info about the logins that took place: 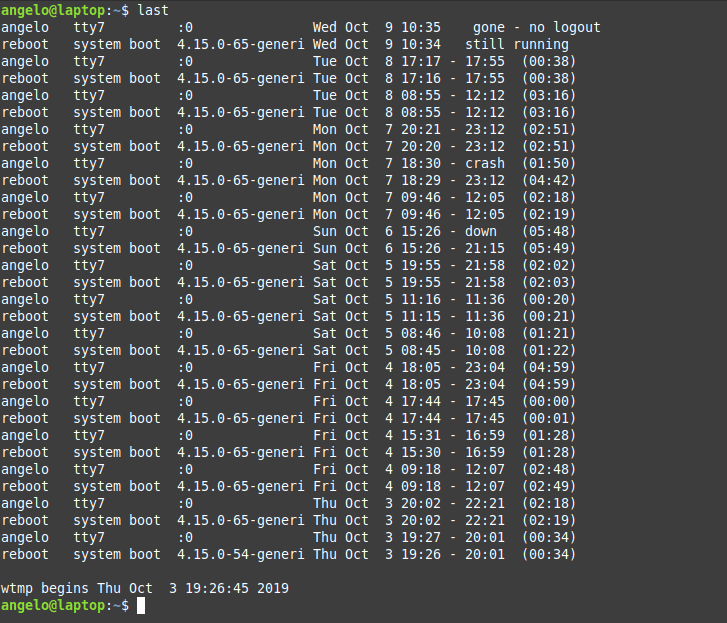 Or the logins of a particular user

These are the user login activity and when it was started and how long it took.

List users’ logins on a specific date or time

What about listing users’ logins on a specific date or time? To achieve this, we use the last command but with the -t parameter:

And now, all you have to do is choose an exact date & time to list who logged at that time.

There are two ways to list the members of a group in Linux, the easiest and most direct way is to get the users from the /etc/group file like this:

This command will list users in the likegeeks group.

The other way is by using commands like the members command in Debian based distros.  However, it is not installed by default in Linux distributions.

To install it in Ubuntu / Linux Mint 19, just use APT:

Or in the case of CentOS:

Once it’s installed, you can run the command then the name of the group you want to list the users to:

This way, you can list users for a group in a Debian based distro. What about a RedHat based distro like CentOS?

You can use the following command:

In Unix systems, each user has a user identifier or ID. It serves to manage and administer accounts internally in the operating system.

Generally, UIDs from 0 to 1000 are for system users. And thereafter for regular users. Always on Unix systems, UID zero belongs to the root users (You can have more than one user with UID of zero).

So now, we will list the users with their respective UID using Awk.

The command that performs the task is the following: 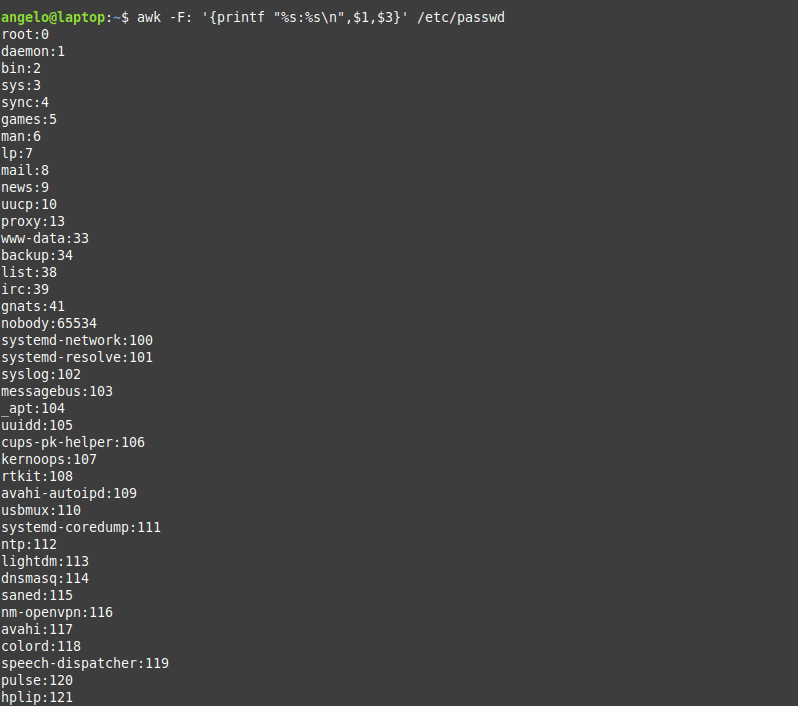 As you can see, each user with his UID.

In a Unix-like system like Linux, there is usually only one root user. If there are many, how to list them?

To do this, we can use this command:

Here we are filtering the file to get users with UID of zero (root users).

Another way by checking the /etc/group file:

Here we are getting users in the group root from the /etc/group file.

Also, you can check if any user can execute commands as root by checking the /etc/sudoers file:

Get the total number of users

To get the total number of users in Linux, you can count lines in /etc/passwd file using the wc command like this:

Great! 43 users. But this includes system and regular users. What about getting the number of regular users only?

Easy! Since we know from above that regular users have UID of 1000 or greater, we can use Awk to get them:

Linux systems have a utility called sudo that allows you to execute commands as if you were another user who is usually the root user.

This should be handled with care in a professional environment.

Also, it is very important to know which users can run the sudo command. For this, it is enough to list the users that belong to the sudo group.

Users in this group can execute commands as super users.

SSH allows users to access remote computers over a network. It is quite secure and was born as a replacement for Telnet.

By default, all regular users can log in and use SSH. If you want to limit this, you can use the SSH configuration file (/etc/ssh/ssh_config) and add the following directive:

Also, you can allow groups instead of allowing users only using the AllowGroups directive:

These directives define who can access the service. Don’t forget to restart the SSH service.

List users who have permissions to a file or directory

We can give more than one user permission to access or modify files & directories in two ways.

The first method is by adding users to the group of the file or the directory.

This way, we can list the group members using the members utility as shown above.

Okay, but what if we just want this user to have access to this specific file only (Not all the group permissions)?

Here we can set the ACL for this file using setfacl command like this:

Now the file can be accessed or modified by the owner, and the user called newuser. So how to list them?

This command will list all users who have permissions for the file with their corresponding permissions.

In Linux, as a security measure, we can lock users. This as a precaution if it is suspected that the user is doing things wrong, and you don’t want to completely remove the user and just lock him for investigation.

To lock a user, you can use the following command:

Now the user named myuser will no longer be able to login or use the system.

To list all locked users of the system, just use the following command:

This will print all locked users, including system users. What about listing regular users only?

As we saw above, using Awk, we can get locked regular users like this:

Okay, now can list all system users (local users), but what about remote users or LDAP users? Well, we can use a tool like ldapsearch, but is there any other way?

Luckily yes! You can list local & remote users with one command called getent

This command lists both local system users and LDAP or NIS users or any other network users.

You can pipe the results of this command to any of the above-mentioned commands the same way.

You can check the man page of the command to know the other databases the command can search in.

Listing users in the Linux system was fun! Besides this, we have learned some tips about users and how to manage them in different ways.

Finally, this knowledge will allow a better administration of the users of the system.