In the previous posts, we talked about some of the basic Linux commands, today we continue our journey, and we will talk about something essential in Linux, which is Linux environment variables.

Environment variables are a set of changing values that are baked into every Linux system. They are also used in other Unix-based systems for the very same purposes.

There exists a large variety of environment variables in the Linux operating system. They can be quite difficult to keep track of and commit to memory.

But it is extremely important that you are aware of the most common ones, as they can be very useful in a wide array of different system administration scenarios, as well as for personal use.

So, as either a brief refresher or an informative list, we’ll provide in easy examples below a complete list of some of the most common environment variables.

These are some of the environment variables that you should familiarize yourself with. It is also necessary to note that variables are case sensitive.

It is important that you make sure that you type the variable name with the right letter casing, otherwise, the output may be completely different.

Though it isn’t too big of a deal to remember as most of the environment variables are in the upper case.

Environment variables can be used to customize the way the system functions. They can also be used to modify code that tells applications on the system how to behave.

For example, many system applications and user-made scripts require access to the current user’s home directory.

We can achieve this by using the HOME environment. Utilizing HOME for a user made script will allow for any user on the system to run the script.

But you can also set new environment variables for temporary or permanent usage.

The printenv command is one way to list all environment variables on Linux. You can see how we use its syntax in the Linux terminal in the example provided below. 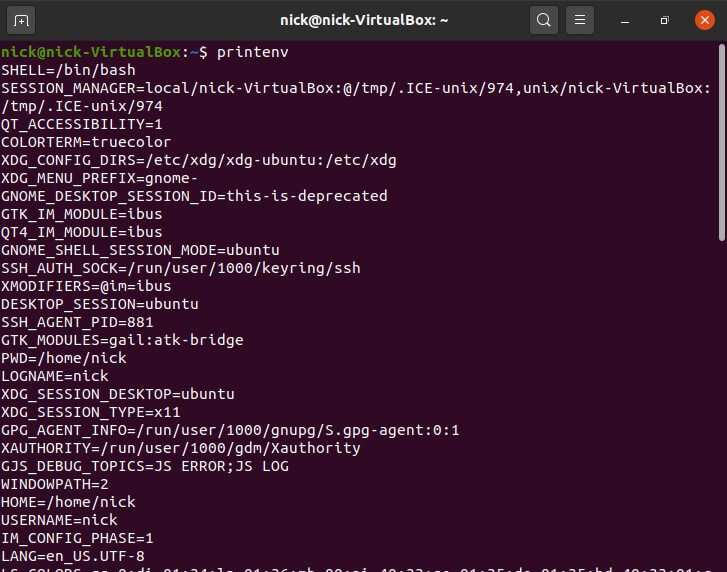 Printing an entire list of every single environment variable on a Linux system may not be the best idea if you are just looking to get the information of a single variable.

But don’t worry, Linux has yet another convenient solution to a seemingly small problem; you can also use this command to list a specified variable by typing its name following the command.

The syntax for listing a specific variable is shown down below.

The syntax for checking multiple variables simultaneously is the same; you must simply list each environment variable after typing the printenv command. We’ll show an example of its syntax below.

One of the most common environment variables that one might edit with is the $PATH variable. The $PATH variable allows the user to specify a directory that the Bash shell should search for applications when you execute commands.

As we mentioned in an earlier section of this tutorial, we can set new environment variables in Linux. If you’ll also recall, it is possible to set both temporary and permanent variables.

Using the following command will create a new shell variable. Though, it is important to note that this environment variable will only be usable in the current terminal.

We’ll show you how to create environment variables in the next couple of examples.

Now that we’ve made a new sample shell variable, we can set this variable as a new environment variable. To set shell variables in your Linux terminal, you’ll need to use the export command. 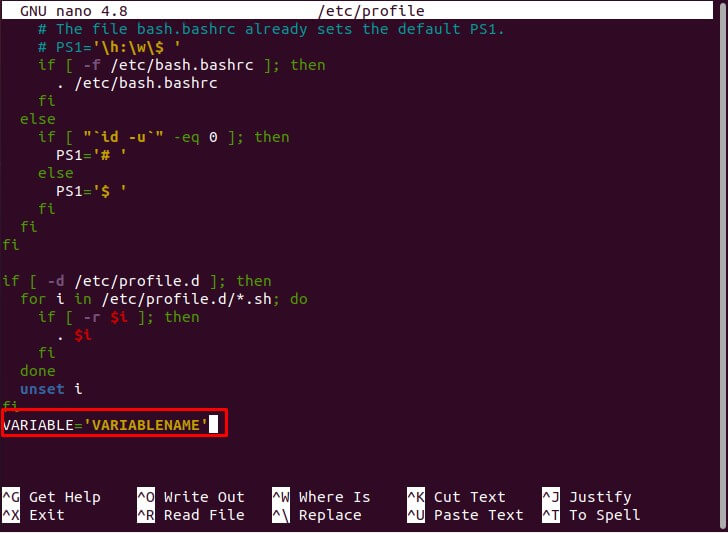 In the examples above, we showed you how to set temporary environment variables using two separate commands. But like in many other different scenarios in Linux, there exists useful alternatives to make certain operations more efficient and convenient; we can configure the non-persistent environment variable using just a single command with the syntax shown below.

As we mentioned in the “Setting Temporary Environment Variables” section of this tutorial, we can configure new environment variables to be both temporary and permanent.

~/.bashrc – This file exists in the user’s home directory and will store variables that can only be used by the respective user.

We can do this by adding a line to the bottom of either file by using the syntax shown in the example below. Take note that we added export before each new variable.

Upon running this command, you can then reload the edited files into the present session with the command shown in the example down below.

Another thing to note is that if you are placing a new environment variable in the /etc/environment configuration file, you aren’t required to type the export command. An example of the syntax can be seen down below.

The methods that we have shown in the examples above will allow you to make your variable configurations persist until you remove them.

You can also utilize the echo command to print a shell variable. This can be useful if, for example, you are making a script whose purpose is to generate a sample text file in your current user’s home directory. And multiple different users will be running the script.

Then the home directory is gonna change all the time depending on who is running it. The script will check the $HOME variable to see which user’s home directory it should use.

As we explained in an earlier section of this tutorial, the $HOME environment variable is the user’s home directory. This check must be accurate as you won’t be able to run certain operations such as the script in our example if the $HOME is not the correct one.

You can check the $HOME variable for yourself using the command line in your terminal with the echo command. The syntax is provided in the example below.

Throughout this tutorial, we showed you how to set and check Linux environment variables in your terminal by using a variety of commands and methods.

But you might be wondering what to do if you want to remove an environment variable that you have set. This can be achieved by using the unset command in the Linux terminal.

In Linux, there exists a certain philosophy that is not present in operating systems like Windows, for example. And that’s that there are no operations or processes that can be reversed or undone.

The thinking here is that if something was important and wasn’t supposed to have been erased, it should have been backed up.

So, it is important to note that if you use the unset command, like we just said above, it cannot be undone. Accidentally unsetting and removing an environment variable will cause it to be lost forever. So use this command with extreme care.

They can be particularly useful for system administrators as they’ll constantly run system processes and programs that need the information that Linux system environment variables carry.

If everything in this post that we have said about environment variables seems like a lot, don’t worry, some things are more important to remember than others.