Hard drive encryption is a process of converting your readable data into something unreadable to protect it.

In this post, we will talk about software-based solutions.

Most implementations of hard drive encryption encrypt the whole disk except the bootable part like the Master Boot Record (MBR) or GPT.

Some hardware-based encryption programs encrypt the whole disk, including the booting part.

Compared to a single file or folder encryption, full disk encryption has many advantages:

Full disk encryption is not 100% safe

Most of the full disk encryption programs are vulnerable to many attacks like:

Cold boot attack: when the attacker has physical access to the computer, he can retrieve the encryption keys from the system after rebooting the system using a cold reboot technique, and the data remains in the RAM for minutes after shutting down the system.

Also, the disk encryption programs are vulnerable to acoustic cryptanalysis, which is the sound emitted by the computer keyboard and internal computer pieces.

Another risky issue is data tampering, so if the attacker tampers your encrypted data, your data will become useless.

There are many free and commercial hard drive encryption implementations available for you to use; we will discuss the best of them.

If you are using Windows 10 pro, you can use BitLocker by enabling it from Start > PC Settings > System > About > BitLocker Settings, then you can turn on BitLocker on the partition you want. 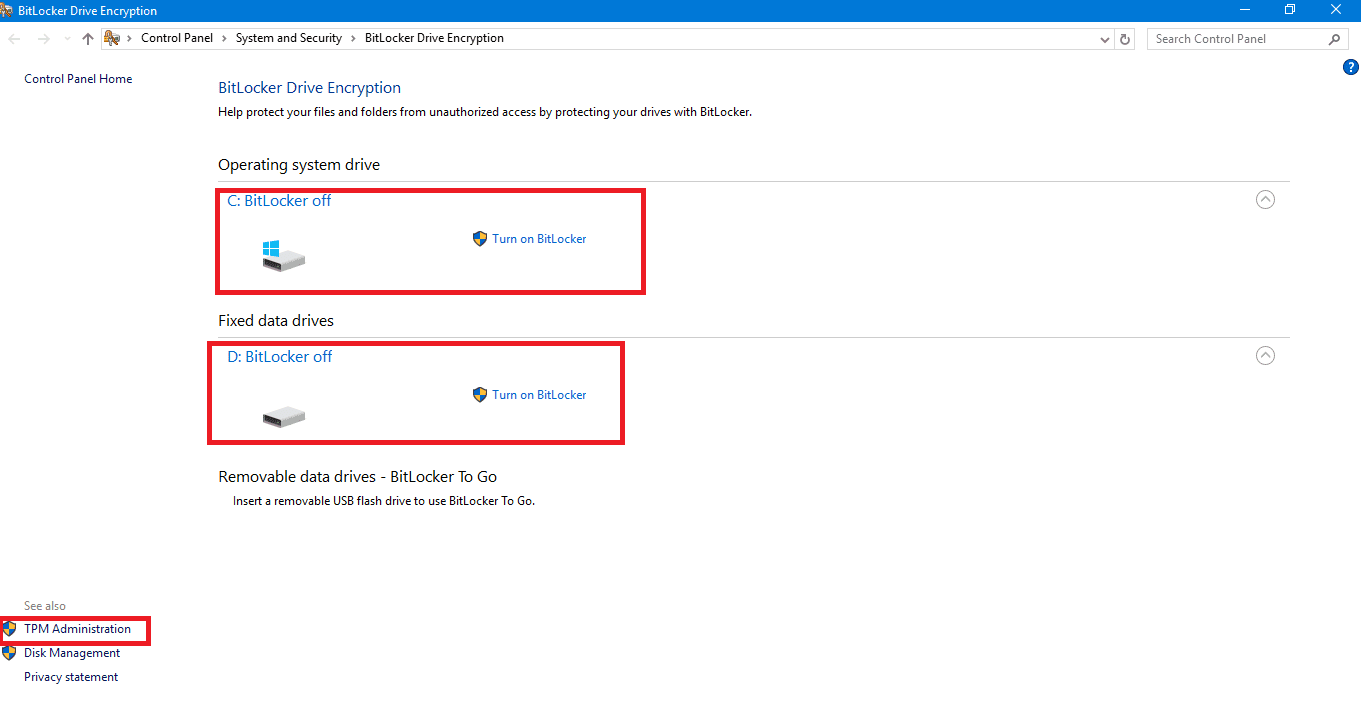 Anyway, if you try to turn BitLocker on for the operating system partition, you will see an error that says that the administrator MUST allow BitLocker without TPM (Trusted Platform Module). 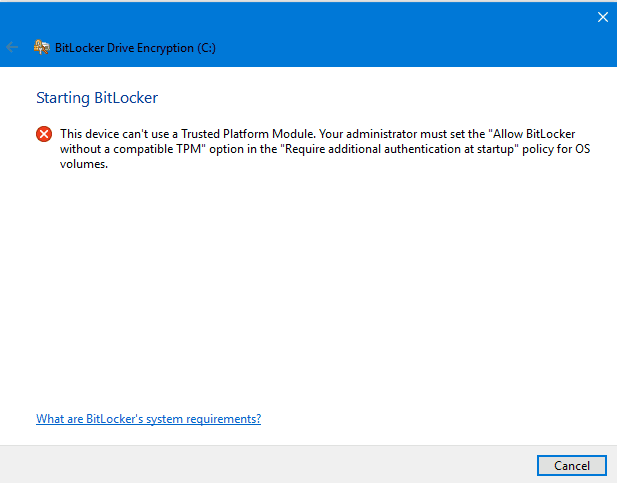 Most modern PCs contain this TPM chip, or if you are building your PC, you can put a TPM chip and integrate it on your PC.

That’s because the encryption keys are stored on that chip. It decrypts your data automatically once you enter your Windows password.

If somebody tries to remove your drive from the computer to decrypt it, he can’t, since the decryption keys are on the TPM chip.

However, you can bypass this requirement and use BitLocker without TPM.

Use BitLocker without TPM 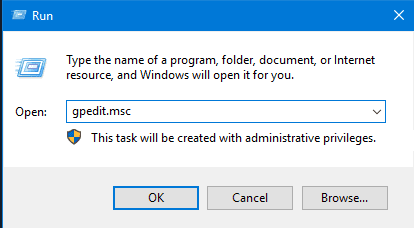 Open the “Requires additional authentication at startup” and Enable it and make sure that BitLocker without TPM is enabled as shown and click OK. 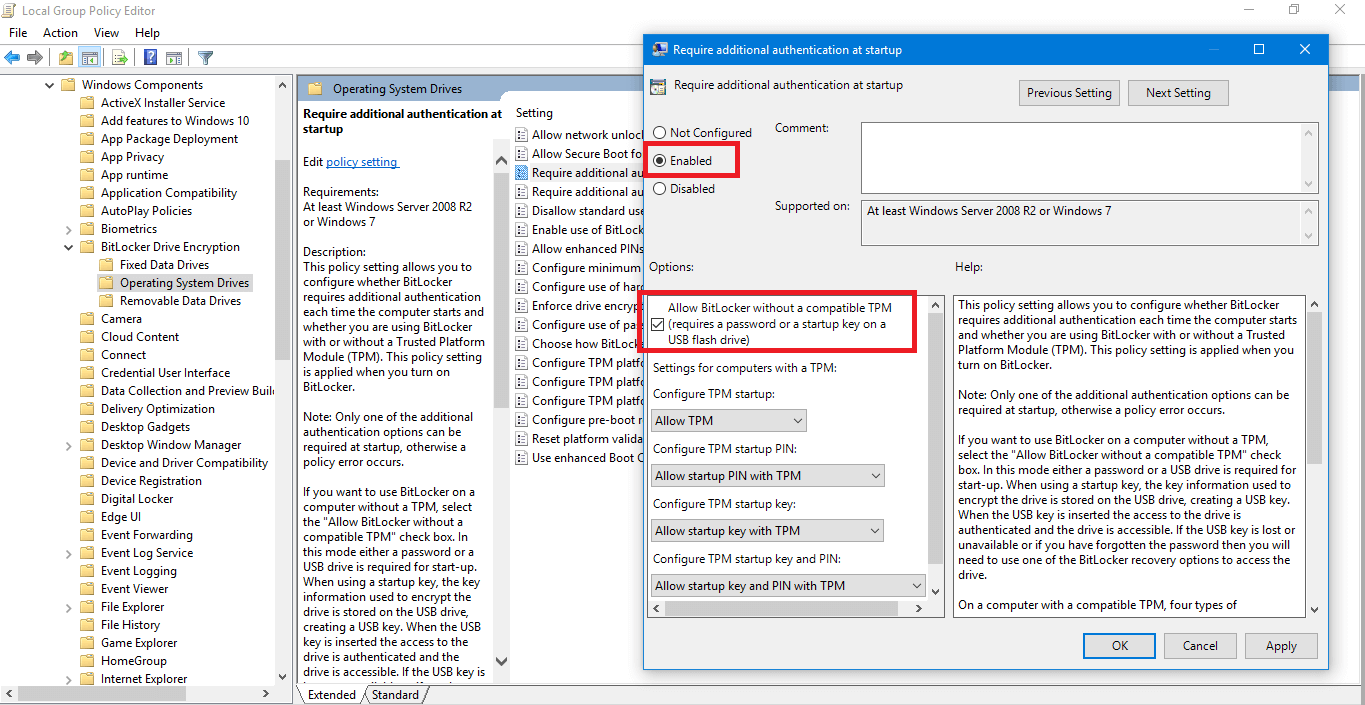 Now it will work.

CipherShed is a free open source encryption program. It’s a continuation of the Truecrypt program.

CipherShed works on Windows, Linux, and Mac OS X. and the encryption goes on the fly.

You can use CipherShed to encrypt individual files or entire drives. After you encrypt the drive, you can mount that drive through CipherShed.

Notice that there are no packages for Linux and OS X, but you can compile the source code and make your package.

For Windows users, you can download it from here.

So for the people who missed Truecrypt, you should try this one.

DriveCrypt is a paid program. It uses 1344-Bit string encryption.

It uses the same technologies as used by the FBI and CIA.

There is a special feature called Steganographic, where you hide your sensitive files into music files.

You can have many users with different privileges.

You can try DriveCrypt for free for 30 days from here.

Logical partitions are encrypted sector by sector. Any attempt to copy single files is blocked even if the drive is attached to another system.

There is a central panel for administration for managing policies, users, and options.

You can try a free trial from here.

VeraCrypt is another free open-source disk encryption program that is based on Truecrypt.

It can open Truecrypt encrypted drives, and also you can convert Truecrypt drives to VeraCrypt format.

It works on multiple platforms like Windows, Linux, and Mac OSX.

You can choose between many encryption algorithms to encrypt your drives.

There is a lot of hard drive encryption programs available on the web; we choose the best and the most used programs.